Actimel - This is a product of the French concern Danone. A fermented milk drink that is distinguished by the content of special lactobacilli called L. Casei Imunitass (each bottle contains about 10 billion of these bacteria). According to the manufacturer, due to the presence of this living creature, consuming Actimel you can significantly increase the protective properties of your body. The brand was launched in Europe in 1994. The arrival in the USA took place a little later - there Actimel known as DanActive.

Appearance Actimel is the French answer to the European success of the Japanese brand Yakult, under which a dairy product with special bacteria was first produced.

Initially in advertising Actimel the fact that the regular use of this product not only improves the activity of the gastrointestinal tract, but also has a most positive effect on the activity of the body as a whole, was actively exaggerated. Danone referred to specially conducted scientific studies, which unconditionally confirmed this. 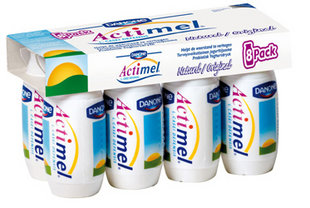 This fact is of interest EFSA (European food agency), which expressed doubts about the veracity of the advertisement Actimel, believing that the research conducted by Danon is clearly not enough. And, in fact, there is still no evidence of such a wonderful effect of the drink on health. In response to this Danone objected that the procedure for assessing the impact of such products on the human body has not yet been properly thought out, which affected the opinion EFSA. However, links to indisputable scientific evidence were removed from advertising.

So is it really that useful Actimel? There is still no consensus. The fact is that the use of dairy products, in any case, is good for the body. And whether Danon products are something out of the ordinary is unknown. Most experts agree that advertising that guarantees the strengthening of immunity simply misleads consumers. It looks like the debate will continue for a very long time.

But be that as it may, Actimel one of the biggest commercial successes Danone. The brand brings corporations billions of euros annually. It is famous and popular in dozens of countries around the world.