Slogans: "Impossible is Nothing"
"Join the Party"

Brand history Adidas - the largest manufacturer of sports shoes, clothing and equipment, begins in 1948, when two brothers Adolf (Adolf) and Rudolf (Rudolf) Dassler (Dassler), not finding a common language, decided to destroy the family business, a well-known company at that time -manufacturer of sports shoes Dassler. The reasons for the gap were not fully known to the public, but this step served as an impetus for the creation of two brands known today, eternal competitors Adidas и Puma. The Dassler family business was divided in half: Adolf Dassler became the owner of the company Adidas, and Rudolf - firms Puma.

Having received his share of the family business, Adolf "Adi" ("Adi") Dassler names his firm Adidas, a little later in the same 1948, gives her the name we know Adidas. Without giving up the glory of the name Dassler, Adi Dassler uses his surname already known in the sports world and adds his name to it: Adi Dassler is formed from Adidas. Later, this name began to be wittily deciphered as "All Day I Dream About Sports" - "All day I dreamed about sports."

The following year, 1949, Adi Dassler officially registers three stripes - the symbol of the company Adidas, a simple and durable sign that fits perfectly into the sporty style of the goods and is always unmistakably recognizable on any sports accessory. Symbolizing the movement up the three steps, the sign Adidas also recalls the three basic principles for the production of sports shoes, formulated by Adi Dassler: shoes must be suitable for a particular sport, be durable and protect the athlete. Three stripes first Adidas applied only to sports shoes, but then migrated to all products of the company. In 1971, the famous shamrock appeared Adidas. Now the shamrock is a symbol of direction "Sport heritage", the initial logo is a symbol of direction "Sport Performance", and the symbol of the third direction sport style became a circle with three stripes.

A sports fanatic and football player himself, Adi Dassler, from his youth was interested in creating sports shoes, thanks in large part to his enthusiasm, the prosperity of the Dassler family business became possible. His goal was to create the perfect shoe for every sport. 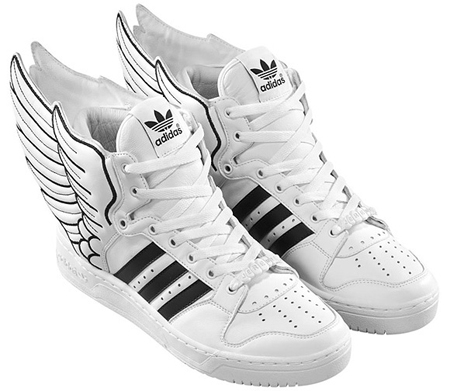 In the post-war years, in a crisis, the Dassler family was forced to either survive or die, and after discussing all the possibilities, it was decided to start producing shoes. In difficult, artisanal conditions, in the laundry room of their mother, the brothers Adi and Rudy Dassler, their parents and sisters started the enterprise, hoping for success and luck smiled at them. Adi Dassler's talent and passion, Rudy's commercial abilities played a role: by the time the IX Summer Olympic Games of 1928 were held in Amsterdam, the Dassler Brothers Shoe Factory (Gebrüder Dassler Schuhfabrik), founded in 1924, had already developed special studs for football players shoes for athletes that were successful with professional athletes.

Since then Adidas fulfilled the dream of Adi Dassler and really successfully developed and introduced into production more than one model of comfortable, practical, beautiful shoes, which numerous fans of the company never tire of admiring to this day. Having expanded production, the company is now engaged in all kinds of clothing for sports, a variety of sports accessories for all sports. Sponsoring the Olympic Games, various competitions, using famous athletes for advertising and promotion, the company has firmly established its status as a leader in the sports world, one of the leading manufacturers of goods for professional sports in Europe and one of the first in the world.

After the death of Adi Dassler in 1978, the company passes to his widow Katarina and later to his son Horst Dassler. Interestingly, Horst Dassler within Adidas France, which he managed created another brand Arena, which produces swimwear and, in turn, competes with Adidas and with Puma. Today Adidas ceased to be a family business, turning into a joint-stock company, whose headquarters is still located in the small German town of Herzogenaurach (Herzogenaurach, Germany), where the history of the company began.