Aldus Corporation was founded in February 1984. It was named after Aldus Manutius, a Venetian book printer who lived in the 15th century. His profile was depicted on the logo of the company. So the name itself already spoke about the publishing orientation of the company. It was founded by Jeremy Jaech, Mike Templeman, Mark Sundstrom, Paul Brainerd, and Dave Walter-individuals, however, who are little known today. The three of them would later become founders of another company that had fallen into oblivion. Visio Corporation.

Meanwhile, another (and much more famous) company Apple I was agonizing over how to attract users to the brand-new computer in such a special way. Macintosh. The business sector was not interested in this machine by definition, and home users were in no hurry to shell out their hard-earned $2,500 for a beautiful, but incomprehensibly necessary toy. And so, in 1985. Aldus creates a program PageMaker, which allows you to do the layout at home, just using the Mac. The history of the computer world has never known such a beautiful symbiosis. Page Maker helped Macintosh The computer became really popular, and the mass sales of this computer made it possible to Aldus not only to stand on its own feet, but also to rise considerably above many other companies. In parallel, thanks to MacThe other company was also forming. Adobe SystemsThe PostScript language used to print on the Apple LaserWriter. 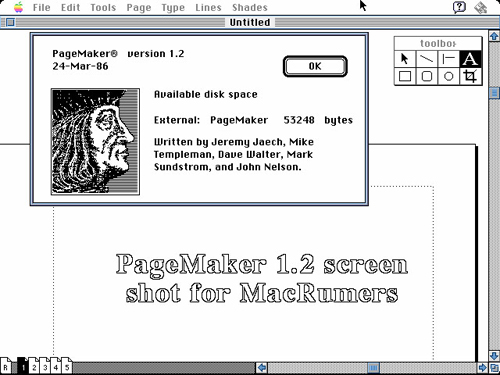 Later versions emerge of PageMaker for operating systems Windows and now almost forgotten OS/2. But by that time, the very notion of Macintosh became firmly associated with the publishing industry (and somewhat later, with the advent of such programs as Illustrator и Photoshop from Adobe even with the designer's). The most original thing is that Apple was skeptical of the publishing market, trying to break into the world of big business by developing a powerful (at the time) and very expensive (even by today's standards) computer LizaIt was not a commercial success. But later, it was graphics, design, and publishing that saved Apple from bankruptcy. I wonder how things would have developed if there had been PageMaker under Windows only a year earlier.

At the beginning everything was going well. All the new versions were coming out PageMakerIn the past few years, we have experimented with other graphics programs that have not been as successful. In cooperation with Microsoft A standard for storing TIFF (Tagged Image File Format) bitmap images is being developed. Other developments were underway. However, by 1990, a competitor program QuarkXPress has managed to squeeze the PageMaker on both Macs and PCs. Things at the Aldus went badly, and in September 1994 it was bought out Adobe Systems. For quite a long time, the new owner PageMaker continued to develop the program. However, in 2004, the termination of this activity was announced. The main focus is now on Adobe InDesign. However, there are many conservative people among publishers, so it is possible that PageMaker used elsewhere and still is. Especially where old Macs have survived, running under the "classic" OS (on macOS X PageMaker no longer works).