As promised earlier, today is the day of the introduction of the latest operating system for the popular smartphone and no less popular player. Meet - Apple iPhone OS 4. New version, new features.

It was stated that the new version of the OS contains at least 100 different "improvements", both global and not so.

Opening the presentation, Steve Jobs did not forget to mention the recent achievements of his company. Such as 50 million sold iPhone (over the years) and 450,000 sold iPad (for these days). He also mentioned a significantly increased number of applications in App Store, and about the fact that the number of downloads has already exceeded four billion. All this is just great, but back to iPhone OS 4. 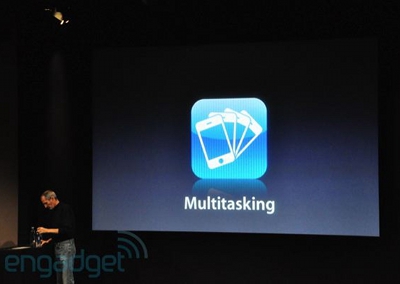 So. Most importantly, the system has multitasking! Yes, a dream come true for many users for whom this tribute to fashion was so important. I wonder what they will reproach now iPhone those who hate him so much? Oh yes, there is still a lack of support Flash.

Other possibilities are less important, but nevertheless very interesting. For example, it became possible to create folders on the desktop, in which to place icons of other applications. Personally, I liked this feature even more than the notorious multitasking.

We should also mention the ability to change the wallpaper on the main screen, the built-in iBook application, originally written for iPad, a game center for social network games, some improvements for business customers ... Lots of updates.

It will be possible to “feel” the new OS in June, when a new one appears iPhone, rumors about which the earth is full. It will be possible to install it on the iPhone 3GS and iPod touch 2nd generation, however, without multitasking support. A little later there will be an update for iPad.