There are so many unusual options in the recently announced Audi A8 that all the legendary wizards would probably hang themselves with envy. One of the main wonders is the new sound system from Bang & Olufsen.

The Audi A8 automatically detects when the vehicle in front has turned on its turn signal. Audi A8 can `read` speed limit signs. Thermal sensors Audi A8 for 100 meters 'recognize' a person. The machine changes settings depending on the indications of the car navigator. And of course the system Bang & Olufsennow the second generation. 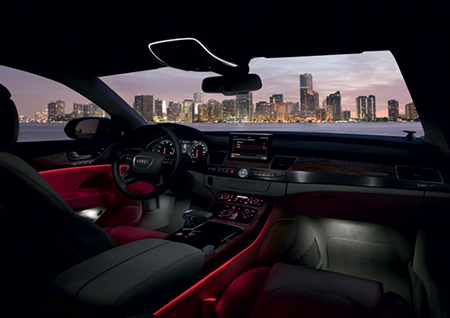 The Advanced Sound System consists of 19 speakers, 5 more than the first version of the system. Much more than people usually use at home. Four speakers are located at the back. Thanks to this, the system can create a "home theater effect" in the car.

The total power is 1400 W, there is a special “cinema” mode, primarily for the audience in the back seat. It remains to be hoped that with such power, and even in a confined space, you will not go deaf forever and will not go crazy when watching a horror movie in the “field conditions”.