Benefit Cosmetics – a network of cosmetics and perfumery stores, since 1999 it has been part of the holding LVMH (Moët Hennessy-Louis Vuitton). The company was founded in 1976, the first cosmetics store was opened in San Francisco, and this small cosmetic boutique immediately attracted the attention of customers, because it was decorated unconventionally - in the style of candy shops. The company was conceived and organized by two twin sisters Jean Ann and Jane Ann Ford (Jean Ann, Jane Ann Ford). 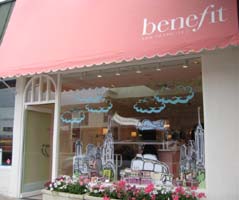 The main distinguishing features of the new store are: unusual design and atmosphere, attention to the appearance of goods (cosmetics of this brand can always be distinguished by the original, thoughtful even in small things, unusual funny packaging in retro style), the presence in the assortment of not just cosmetics, but ready-made solutions for certain problems that arise in women, and, finally, the creators of the brand emphasize the high quality of their cosmetics, its durability and ease of use.

The company became so successful that in 1999 it was acquired by a “luxury” holding LVMH, now the network Benefit Cosmetics becomes famous all over the world. Main markets for Benefit Cosmetics steel in the United States and Great Britain, the brand is also extremely popular in Japan, but you can buy the company's products almost everywhere, it is widely represented in many large cosmetic chains, you can also use the services of online stores.