A non-profit organization dedicated to saving large cats. But not in the wild, but in cases where these magnificent animals suffer while living among people. A typical example is stories when rich people get a kitten at home, for example, cougars, and when the animal grows up, they cannot or do not want to keep it (most often, animals are simply taken to the nearest forest and abandoned, dooming to death). It is not uncommon for animals to be specially bred for slaughter, for the sake of valuable fur.

Activity Big Cat Rescue started in 1992 when founder Carole Baskin and her husband Don bought 56 lynx cubs to save them from becoming fur coats.

To date, the organization provides shelter to more than a hundred animals. There are 14 out of 35 species of cats, and not only large ones. These are tigers, lions, leopards, cougars, lynxes, ocelots, servals, caracals and others. There are also cats such as ligers (a cross between a lion and a tiger). Some of the presented species are under the threat of extinction. An area of 45 acres (about 10 hectares) has been allocated for their maintenance. This, of course, is not the best for animals, however, this is the only way to guarantee that they will feel good, no one will mock them and send them to slaughter. 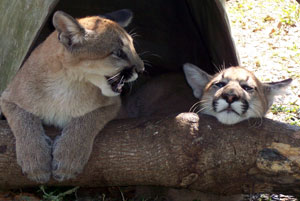 Initially, the organization actively collaborated with people who wanted to keep large cats at home. It was believed that in a private house the animals would be provided with everything necessary. However, as practice has shown, few people can create the conditions that are necessary for keeping big cats at home. Even bottle feeding can be a headache if you don't know how to do it right. The founders of the organization even wrote a small book and filmed several video tutorials especially for those who brought such a beast into their homes.

Over time, people began to bring animals themselves. In most cases, these were owners who realized that they could not cope with the maintenance of their pets. There were also cases when kittens were brought by hunters who shot their mothers.

Big Cat Rescue does not receive any government subsidies or grants. The organization exists solely on donations and thanks to the sale of various souvenirs. Over the years of its existence, it has been repeatedly attacked by people for whom big cats are just business.