German manufacturer of small household appliances. He is best known for his electric shavers and epilators, clippers and electric toothbrushes (brand Oral B). It also produces blood pressure monitors and thermometers, irons, toasters, calculators, and so on. Consumers have become so accustomed to this image of the company that they do not even suspect that it once produced such electronics as movie cameras, televisions and players.

Yes, and history Brown has a long history - the company was founded in 1921 by the Prussian engineer Max Braun. Initially, he was engaged in the manufacture of components for electronics, and later he began selling radio receivers of his own production. Brown was not afraid to experiment - he was the first to massively use plastic in his products, using stamping machines of his own design. This allowed him to quickly get back on his feet. Since 1928, the company has already owned its own factory. Players, radiograms appear in the assortment of manufactured products, the range of receivers is expanding. In 1935, the company logo appears, which is still used today. According to legend, the enlarged letter "A" looks like a radio tube, which it symbolizes. 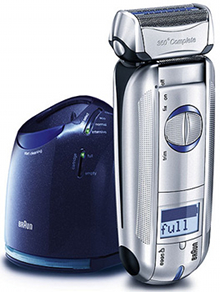 1941 was a significant year for the company - Brown developed an electric razor. Since then, he decides to give his offspring maximum attention. Little is known about how the company survived the war (the German company is modestly silent about this period). After the war, she again returned to the production of radios. Serial production of electric shavers began only in 1950.

In 1951, Max Braun dies and the management of the company passes to his sons, Arthur and Erwin. The company begins to engage in the production of household appliances. More and more attention is being paid to product design. Moreover, in 1956, its own design department appears, in which it manages to reach certain heights and for which it manages to receive many prestigious awards. Other products Brown was even honored to become an exhibit in renowned museums of art and design.

Since December 19, 1967, Braun has been a subsidiary of the American The Gillette Company, which since 2005 belongs to Procter & Gamble. Merged with Gillette gone Brown benefit - it begins to enter the world market.

Head Office Brown located in Kronberg, Germany (Kronberg, Germany). The company's products are assembled both in Germany and other countries of the world (naturally, China is included in this list).