The American company Brown-Forman Corporation, one of the largest producers of alcoholic beverages in the world, said that it would take part in the international specialized exhibition Moscow Bar Show 2011 for professionals in the bar industry.

The company will represent such world famous brands as whiskey Jack Daniel's, vodka Finlandia, tequila Herradura и El Jimadoras well as bourbons woodford reserve и Early Times. For the first time in Russia, a liqueur will be presented Chambord from France, based on blackberry and XO cognac. Exhibition visitors will have the opportunity to taste a cocktail based on this liqueur.

The exhibition will be visited by a master whiskey distiller Jack Daniel's Jeff Arnett This is the seventh and youngest master distiller in the history of the company. He took up his position quite recently - on August 29 of this year. Mr. Arnett will tell the story Jack Daniel's, will tell about the principles of its production. And on September 27, he will take part in a tasting of this world's best-selling whiskey. 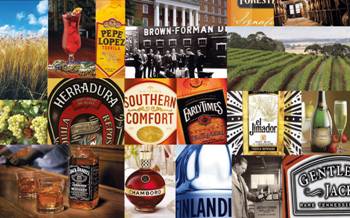 Also at the exhibition you can see a new designer bottle of vodka Finlandia. It was called "Melting Ice" and was designed by a design team led by renowned Finnish designer Harri Koskinen.

Tequila house products Casa Herradura will be represented by the director of international development of the company Ruben Aсeves. He will also be present at the comparative tasting of the company's products.

Moscow Bar Show 2011 will be held from 27 to 29 September at the IEC Crocus Expo. With brands Brown-Forman will be available at booth F20 (except for tequilas, which will be on display at booth F16).