Beer from Norway, produced at the eponymous brewery in the town of Kristiansand (Kristiansand, Norwey). One of the most popular national brands - there is even an association of beer lovers in Norway SW. Plant SW, together with Hansa Brewery и Borg Bryggerier makes up a brewing company Hansa Borg Bryggerier, the second largest in the country. The company owns such popular brands in Norway as Hansa, borg, Clausthaler, Olden and of course SW. She also owns the exclusive rights to manufacture and distribute beer in the country. Heineken and some world famous soft drinks like Schweppes. 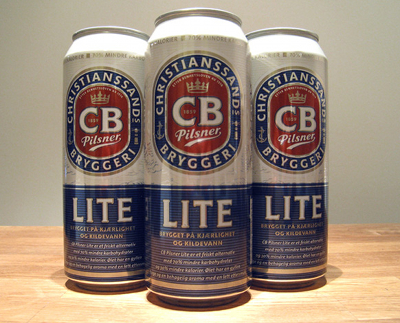 History Christianssands Bryggeri began in 1856 when a certain Ole Jacob Mørch, a statesman, built his own brewery. However, the difficult times that came in Europe (the Crimean War played a significant role in this) forced the beer lover to sell his enterprise. The new owner was Jørgen Christiansen, who decided to put the business on a grand scale. He refurbished the plant somewhat, named it after himself, and restarted production in 1959. The brewery remained the property of the Christiansen family until 1964. Then it was acquired by another Norwegian brewing company - Tou Brewery. Then SW changed owners twice more before joining in 1999 with Hansa Borg Bryggerier.

When making beer SW water is extracted from an artesian well from a depth of 32 meters. However, this was not always the case - the source was discovered relatively recently - in 1932.