History of the Chupa Chups brand

The most popular lollipops in the world come from Spain, where they first appeared in 1958. The author of the idea and subsequently the founder of the Chupa Chups Group was the hereditary confectioner Enric Bernat. He lived in Barcelona, owned Granja Asturias SA and his own confectionery.

Despite the successful business, in 1958 Bernath decided to study in detail the preferences of buyers. Marketing research conducted by a consulting firm from France, gave quite the expected result. It turned out that products designed with the interests of predominantly adults in mind are consumed mainly by children and adolescents. Naturally, the confectioner thought about how to make his product more attractive specifically for this age category. 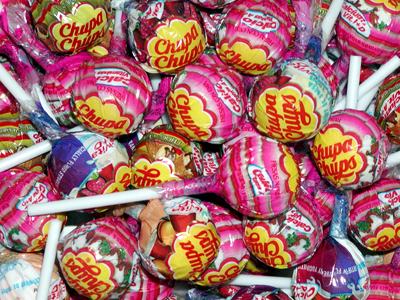 According to legend, Bernat came up with the idea of producing sweets on a stick after a conflict he accidentally saw, when the mother scolded the child for clothes and hands stained with sweets. But children really often get lollipops out of their mouths, and then grab all the surrounding objects with sticky fingers. Discussing how to avoid this, the future creator of Chupa Chups remembered cutlery. It's hard enough to get your food dirty while using them, so why not stick some sweetness on a small fork? And so it was done, and later the fork was replaced by a stick - at first wooden, then plastic. In addition, to make it easier for a child to buy chupa chups, they began to place the novelty at the checkouts of stores.

The brand name has its own, no less entertaining story. At first, because of the spherical shape and resemblance to a soccer ball, candy was called GOL. However, in the first commercial, the song chupa chups sounded (which you can listen to and download now), where the Spanish verb “chupar” was repeatedly heard, which means “suck”. Therefore, the lollipop was first renamed CHUPS, a little later the modern version of Chupa Chups appeared. The trademark and name were registered in 1962, and two years later the company itself was renamed Chupa Chups SA due to the success of the new product.

Another interesting fact about the brand is the creation of the logo by Salvador Dali himself. Enric Bernat in 1969 personally approached the famous compatriot and asked him to design a popular brand. For a decent fee, the artist sketched the famous yellow-red "chamomile" in just an hour, and this drawing, with minor changes, is still used by the trademark.

Practical form, variety of tastes and types, competent marketing policy, as well as advanced technologies - these are the components of the unsurpassed popularity of Chupa Chups. These lollipops are well-known and are sold well in all countries of the world, the brand name has even become a household name (chupa-chups are now called any candies of a similar configuration). The company also became famous for its unforgettable original commercials, which also contributed a lot to commercial success.

Chupa-Chups production facilities are concentrated mainly in the Spanish city of San Esteve Sesrovires, near Barcelona. At the moment, the company is owned by the multinational Italo-Dutch corporation Perfetti Van Melle and its leading brand.