Circle - This is a brand of exclusive French champagne, due to its high quality and no less high price, the product belongs to the luxury class. The brand is owned by a “luxury” holding LVMH (Louis Vuitton-Moët Hennessy).

Champagne Circle produced since 1843, it received its name in honor of the family that has been (and is still engaged in) its production, passing the secrets of craftsmanship from generation to generation. And today one of the Circles manages production, even though the brand is actually owned by the holding. LVMH.

And the first Circle of the Circles, who founded the production of champagne was Johann-Joseph Krug, who emigrated to France from Germany. He worked for almost a decade in another champagne house - Champagne Jacquesson as an accountant, and then one of the leaders, before he decided to establish his own company, but then quickly picked up pace and brought his production to the leaders of the industry. Champagne house Krug is one of the three most famous champagne producers, but even among them it stands out with a special individual approach to the production process of its champagne, which ultimately turns out to be unique, incomparable in taste and aroma to any other. Since the founding of the production, six generations of the family have already changed, but until now, from the older generation to the younger, old notebooks with Johann-Joseph Krug's notes are passed on, in which he carefully recorded all the secrets of production. 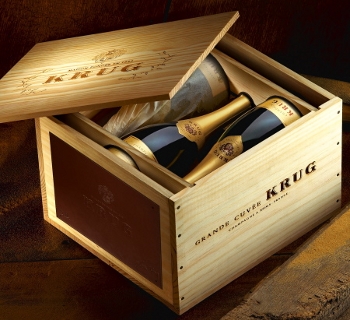 Especially manufacturers Circle they are proud that in the production of champagne, for its birth, as winemakers say, small old oak barrels are used, while most producers use huge stainless steel barrels, another secret of the champagne house Circle - long exposure of wine. All three champagnes Chardonnay, Pinot Noir and Pinot Meunier from Circle have a bright individual smell and unique taste. For the production of champagne, grapes grown in the company's own vineyards are used.

About half a million bottles are produced annually. The main volume of champagne produced is exported, in particular, the main buyer countries are England, Italy, Germany, USA, Switzerland, the Netherlands, Spain, almost a fifth of champagne sales Circle falls on the recently conquered Japanese market, the markets of Russia, China and India are currently considered promising. Such a high level of demand in the absence of large advertising and marketing costs once again confirms the high quality of the product itself. Name Circle highly regarded by connoisseurs and connoisseurs of champagne wines, although the brand itself is not inflated with the help of the press or television. The headquarters of the champagne house is located in Reims, the largest city of Champagne, perhaps the most famous wine region in France.