After the suicide of his father, André Citroën inherited a good fortune and quite a flourishing business associated with precious stones. Everyone expected that the son would follow in the footsteps of his father. However, simple trading was of little interest to Andre. Working with technology attracted him much more. He received an appropriate education and began work as a simple engineer. But no, it's not easy. The young man perfectly combined both the talent of a "techie" and a businessman. He was not a brilliant engineer, like another French car manufacturer, Louis Renault, but, nevertheless, he managed to make a significant contribution to the development of technology. The gears of a special design presented by him turned out to be much more perfect than their analogues produced at that time. However, evil tongues claim that the invention does not belong to Citroen at all and, in fact, it was made by some obscure Polish mechanic, from whom the Frenchman bought the idea. Be that as it may, but these gears determined the future of Andre, making him famous. In the future, they will form the basis of the "double chevron" - as the logo is sometimes called. Citroen, which appeared in the company almost from the very first days of its existence and practically did not change afterwards.

Initially, Andre worked for others - his talent as an entrepreneur brought big money to employers. But he clearly wanted more. And the outbreak of the First World War gave such a chance. Apparently Citroen knew how to convince people, since he managed to get funding from the government for the construction of an ammunition factory. Military orders brought fabulous incomes.

Being a far-sighted man, Andre was well aware that this could not go on forever and the war would end sooner or later. Therefore, in parallel with the production of shells and cartridges, he is engaged in the design of cars. To do this, he invites the best specialists of that time, personally travels to the United States in order to independently familiarize himself with how things are built at the factories of Henry Ford. By the end of the war, he has everything ready - there are funds, there are the right people, there are ready-made projects.

1919 is considered to be the year of birth of the automobile brand. Citroen. Its founder decided to bet on affordable and simple cars that could be mass-produced. This is how the Citroën Type A is born - the first model of the company. By the end of the year, the car is being produced in the amount of 30 units per day. At that time in Europe, this was simply an excellent indicator. Serial assembly, the merits of which Andre appreciated while visiting Ford, quickly bore fruit - thanks to her, it was possible not only to increase the speed of production, but also to significantly reduce the cost of it.

Citroen from the very beginning paid great attention to advertising and PR. And not only for his company, but also for himself. A sort of Steve Jobs of his time. As a result, he managed not only to increase sales, but also to achieve exceptional confidence from creditors who without hesitation provided him with huge sums. Citroen on horseback. He opens new factories, expands production, achieves record growth in production, frankly engages in tyranny - in general, he lives to the fullest.

The beginning of the 30s was marked by a major reconstruction of factories Citroen - the founder planned to launch a fundamentally new car model into production, which promised to be a real hit. All this required the investment of huge capital, spending which Andre fell into a trap - the sudden onset of the economic crisis led to the fact that people began to buy badly even cheap cars. Funding was urgently needed, which was never found. The once successful company went bankrupt in a matter of months. In 1935, it was bought by a manufacturer of car tires Michelin. André Citroën died the same year, as the newspapers wrote, having lost the only purpose of his existence.

To my credit Michelin I must say that they continued the glorious work of Andre, who laid such a magnificent foundation. The star of the brand does not fade away, but continues to shine with renewed vigor. The model, which the unfortunate Andre counted on so much, really becomes very popular. However, it was the success of this model that saved the company. Realizing that she has acquired a goose that lays golden eggs, Michelin begins to invest in Citroen large sums and in every possible way contribute to the development of the company. Hereafter, this period will be called "Michelin era".

World War II brought Citroen many problems. But the company heroically endured them, without stopping the production of cars. It was then that the idea of \u200b\u200bcreating an inexpensive and unpretentious little car was born, which would be accessible even to a poor consumer. This idea found its embodiment in the Citroën 2CV, which appeared in 1948 and was produced until 1990. 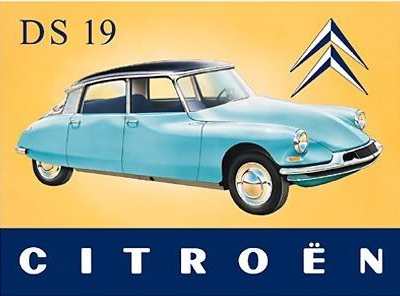 But not only cheap cars - the “Michelin era” is also famous for the fact that under the brand Citroen unique limousines are also produced, such as the Citroën DS. These models were real innovations. They were ridden by the richest people in France and around the world. But in the end, these models almost ruined the company. This time, it was the oil crisis of the 70s that was to blame, when the demand for luxury cars plummeted, which caused Citroën's business to deteriorate sharply. In 1976 the company merges with Peugeot, is formed PSA Peugeot Citroën. Having one leadership, these brands are positioned as independent from each other (although, in reality, this is not the case).

The 70s and 80s of the last century cannot be called successful for Citroën The company just existed. The revival began in the 90s. It was then that extravagant cars began to be produced under this brand again.

long time advertising Citroen "decorated" the Eiffel Tower in Paris. Such a billboard cost incredible money. But such ads paid off very well. And to this day it is considered that it was one of the largest advertising media in the world. 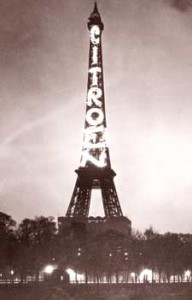 Perhaps not a single car has been awarded so many offensive nicknames as the Citroën 2CV - “ugly duckling”, “four wheels and an umbrella” ... It was awarded the “honorary” title of the ugliest car in the world, which no one else got yet. But nevertheless, all this did not affect the popularity of the Citroën 2CV in any way - in the first years of production, queues lined up for it for years to come.
Total
0
Shares
Share 0
Tweet 0
Pin it 0