Companies producing similar products are always competing with each other. This is understandable and natural. But for a war to last for a whole century - this does not happen often.

And, by the way, this is exactly what is happening with the two main producers of carbonated drinks - companies Coca Cola и PepsiCo, which owns the Pepsi Cola brand.

It is hard to even imagine how much effort was spent by each of them to stand out from the competitor, how much money was spent on advertising and how many managers lost their jobs, having made an unforgivable mistake. But the most amazing thing is that the brand war does not even think of ending. On the contrary, it is still in its full swing, but for now we can only speculate about who will emerge victorious from it in the end.

It all began at the end of the 19th century. It was then, in 1886, that Atlanta pharmacist John Stith Pemberton first invented a recipe for a drink based on coca leaves, which later became the well-known Coca Cola to all of us. 12 years after that, New Bern pharmacist Caleb Bradham also comes up with an invigorating and tonic product - Brad's Drink, which eventually turned into Pepsi. In those years, both drinks existed in parallel, and none of their creators had any idea about the existence of a competitor. 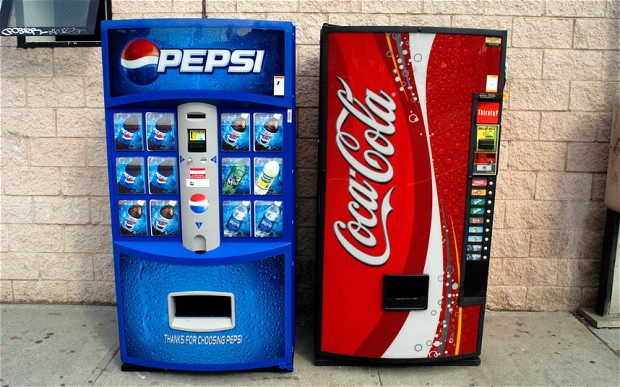 The end of the 19th century and the beginning of the 20th were marked by the rapid growth in the popularity of both "kols". In 1899, the first Coca Cola plant was built and the production of bottled beverages began, which made it possible to expand sales far beyond the US. In 1904, Pepsi Cola began to be sold in glass, which in a matter of years opened over 250 production facilities throughout the country.

At that time, Coca Cola was far ahead of all its competitors. And therefore it is not surprising that every year she has more and more imitators. In 1916, company lawyers sued twenty-one companies that looked like a top seller in name, color, or bottle shape. It is noteworthy that Pepsi did not make the list - it occupied a separate position, having its own circle of admirers.

The beginning of the war

In 1928, Coca Cola began sponsoring the Olympic Games, which it has continued to do to this day. A couple of years later, the Swedish artist Haddon Sundblom created the image of the red-cheeked Santa Claus, who for the next eighty years will smile at us every year with a New Year's drink advertisement. The company's success has not gone unnoticed by its competitors. And the main one, Pepsi Cola, decides it's time to step out of the shadows and finally make a name for themselves.

And the first such opportunity appeared at Pepsi in the 30s of the 20th century - during the years of the Great Depression. During the crisis, bottles of Pepsi Cola came on the market, twice the volume of the competitor's bottles, but sold at the same price as them - 5 cents apiece. “Twice as much for the same money,” the advertisement said. The marketing move brought really good results. By the way, the company periodically returns to it even now, pouring its drink into bottles of 0.6 liters instead of 0.5. 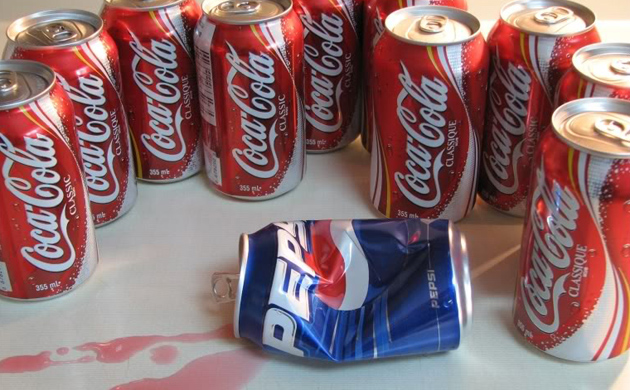 Nevertheless, Coca Cola did not want to forgive the competitor for such impudence. In 1938, she filed a lawsuit against Pepsi Cola, accusing the company of illegally using the word "cola" in its name. The lawsuit lasted for three years, but the lawyer hired by Pepsi, Wendell Willkie, worked out his money well - the court recognized the word “cola” as a generalizing term, thereby depriving Coca Cola of grounds to accuse a competitor of plagiarism. With this, the short official war ended and a long behind-the-scenes war began.

Since the 40s and to this day, the tension between the two companies has not decreased. Moreover, they continued to compete even during the Second World War, using the political situation in the world as an additional opportunity for self-promotion. So, each person in military uniform could buy a bottle of Coca Cola for only 5 cents, and Pepsi was completely painted in the patriotic colors of the American flag, becoming blue-white-red.

When the war ended, the companies actively took up the division of spheres of influence. And, first of all, they needed to win back their audience. If Coca Cola has traditionally been a favorite drink of family people, then Pepsi directed all its efforts to attract the attention of young people. Its slogan was the phrase “Be sociable, drink Pepsi”, which eventually changed to the more explicit “Pepsi is for those who feel young.” Well, in 1964, the well-known slogan “The new generation chooses Pepsi” was already fully used by all of us. The advertisement for the drink was so successful that it even made its way into marketing textbooks. 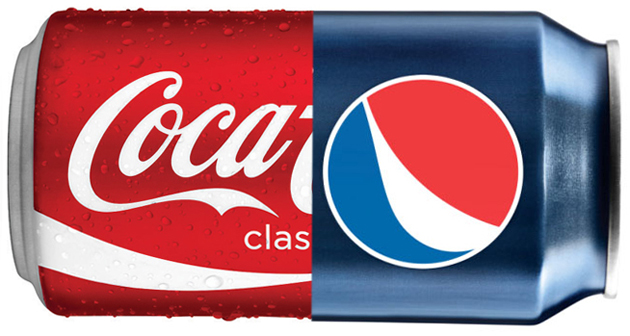 Coca Cola, with its emphasis on human values, was still the top seller, but Pepsi was already on its heels with might and main. Gradually, the brand war went far beyond the US, and now companies were fighting for markets in other countries too. In 1985, the top management of Coca Cola still panics and decides to change the classic drink recipe, bringing it as close to Pepsi as possible to taste. This is how New Coke appeared on store shelves for the first time.

However, the consequences of such a step were not the same as originally planned. The modified drink caused sincere indignation among fans of the classic Coca Cola. A real scandal began - the “Organization of Old Cola Lovers” was instantly formed, which was not too lazy to sue the manufacturer of the drink. The company had no choice but to return to the original recipe. New Coke was discontinued, and everyone involved in the launch of the failed product was fired instantly.

Nevertheless, the scandal turned out to be only beneficial for Coca Cola - interest in the drink grew with renewed vigor and sales jumped up noticeably. Pepsi was again far behind, but was not going to give up. She began the 90s with a thorough rebranding. So, of the three primary colors, PepsiCo left only blue. Its logo and slogan have changed - instead of the traditional "The new generation chooses Pepsi", now it sounded more intriguing - "Pepsi is changing the script."

In the summer of 1996, the Olympic Games, traditionally sponsored by Coca Cola, were to be held in Atlanta. In April of that year, Pepsi decided to strike its main blow. She organized a world tour of stars in the capitals of the world, during which they advertised this drink. The advertising company involved Cindy Crawford, Claudia Schiffer, Andre Agassi and more. Moreover, the new Pepsi slogan was broadcast live even by astronauts in orbit. As a result, PepsiCo managed to come close in sales to Coca Cola, but never surpassed it.

With each new original marketing ploy, Pepsi got closer to its competitor, but never overtook it. According to most experts, the reason for this lies in the ideological message on which brands are based. While Pepsi pays attention to youth, football, movie stars, Coca Cola is based on eternal values and is associated mainly with Christmas, family and home comfort. Every Pepsi ad is a true work of art. It is provocative and bright, and therefore always pleases both fans of the drink and its opponents. But Coca Cola still continues to be ahead. 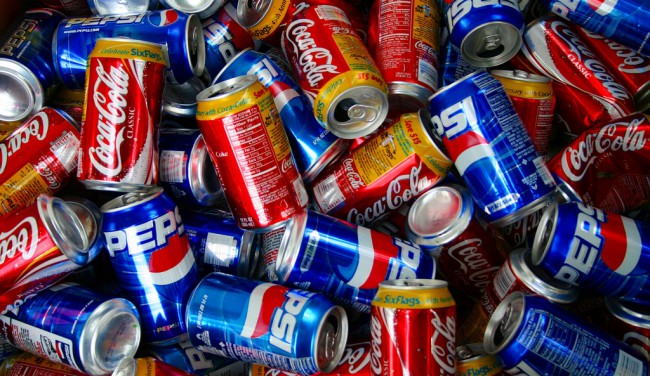 So, according to the latest data, Coca Cola controls 42.7% of the US market and receives 74% of income from the international market. Pepsi, on the other hand, controls only 30.8% of the domestic market, while its international sales revenue does not exceed 48%.

Overtakes Coca Cola and its competitor in terms of brand value. So, in 2010, the brand was valued at $70 billion, five times the value of Pepsi.

But it is still too early to talk about the victory of one company and the loss of the second, since the battle is far from over. PepsiCo continues to participate in various promotions and advertising campaigns designed to maximize it in the eyes of potential buyers. Coca Cola, in turn, with all my might defending the positions.

How the Hundred Years' War will end and who will get the laurels of the winner - we still have to find out.