To date, the Colgate brand ranks first in popularity in the domestic market. We know this company for its toothpaste, but it also produces a number of other products - household chemicals, shampoos, shower gels, deodorants, and pet food. Its net income for the quarter exceeds $600 million, and, apparently, this is not the limit.

Colgate has been around for over two centuries. So, in 1806, a young businessman William Colgate opened a small shop on Dutch Street in New York selling starch, soap and candles. His partner at that time was Francis Smith, in connection with which the founded company got its name - Smith and Colgate. True, the very first difficulties scared the partner away. Francis Smith was replaced by Colgate's brother-in-law John Gilbert, and the company changed its name to William Colgate and Company.

By 1817, the partners had put their affairs in order so much that they were able to open their own starch factory. It was located in Jersey City, New Jersey, and produced mainly toilet soap and granular starch.

In 1850, an American dentist named Sheffield began his development of the world's first toothpaste. It was they who determined the further direction of the company's development. But, unfortunately, John Colgate was not destined to become a witness to this. In 1857, the founder of the company died, having devoted more than fifty years of his life to his beloved work.

The invention of toothpaste 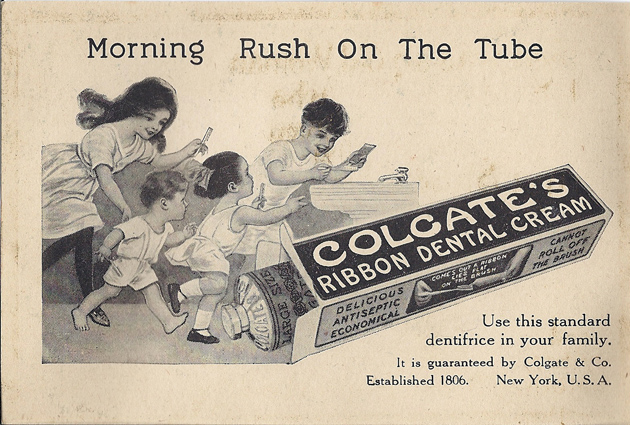 In the years following the death of the founder, the company has been actively working to expand its range. So, perfumes, essences and toilet soap went on sale. However, the idea to produce toothpaste Colgate & Company caught fire only in 1873.

Sheffield's dentifrice looked promising. The fact is that the previously used tooth powders erased the enamel and were far from being so convenient to use.

A new product was produced at that time in small glass jars, but already in 1886 they were replaced by special tin tubes. For the first time such a tube was developed by the American artist John Rand, who suggested storing paints in this way. Nevertheless, Colgate & Company adapted the invention to their needs and, without wasting time, filed a patent.

The company celebrated its centennial anniversary at the peak of its popularity. The number of types of toothpastes, soaps and perfumes produced by her was large enough to fill all the store shelves. 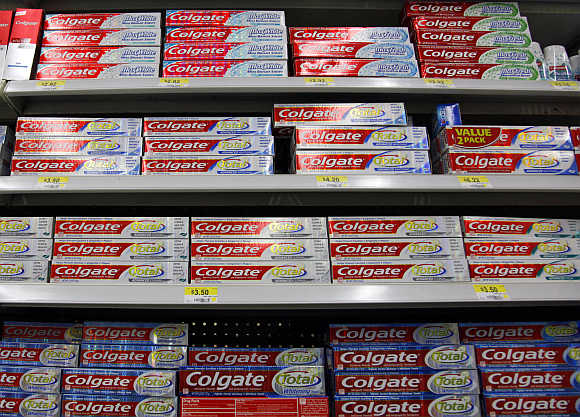 In 1927, Colgate & Company decided to merge with Palmolive, a well-known soap manufacturer at that time. This allowed it to become the largest in its industry and bring products to the international level. The first representation appeared in France, then Australia, Great Britain, Italy, Mexico, Brazil, Argentina and even South Africa were covered.

In 1947, the company launched two new products, Fab washing powder and Ajax cleaning agent. To this day, these products are leaders in sales in the Western market. In the same years, Palmolive dishwashing detergent appeared. Well, the 50s were devoted to improving the therapeutic and prophylactic properties of the manufactured toothpaste. So, thanks to a change in the formula, it has become an order of magnitude more effective in protecting against caries.

Exactly 50 years after the merger of Colgate & Company and Palmolive, the newly formed company decided to expand even further. This time she teamed up with Hill's Pet Products, a pet food company. Thus, deodorizing soap, gel toothpaste and dishwasher detergent were not the only areas that received attention at that time.

The 90s became a period when the company was actively expanding, acquiring more and more new brands. Among them were Javex bleach, Murphy Oil Soap wood cleaner, Mennen deodorants and antiperspirants. In the same years, the company expanded its sales markets to include China and Eastern Europe. In 1994, a factory for the production of mouth rinses begins its activities.

Today, Colgate-Palmolive is a $13 billion transcontinental corporation whose products cover many areas of human life.

The reason for such rapid growth is extremely simple - the company produces a really high-quality product. For example, Colgate Total toothpaste is approved by the US Food and Health Administration and the American Dental Association as an effective treatment for cavities and other oral problems. In addition, she was awarded the marks of conformity of the Independent Dental Associations of 30 different countries around the world.

And many products manufactured by Colgate can boast of similar indicators. Therefore, this two-hundred-year-old corporation is simply impossible not to admire.