On November 23, 1869, on the River Clyde, in Scotland, a significant event took place - a clipper ship was launched, which was to become legendary. The Cutty Sark went down in history as the fastest sailing ship in history. Such clippers were called "tea clippers" because they were used to deliver tea from India. The fact is that in those years they did not know how to properly store tea, it quickly ran out of steam, losing both smell and taste. The only opportunity to taste a truly fragrant drink was provided only by its quick delivery to the shores of foggy Albion. And only high-speed tea clippers could provide this. In those years, there were frequent races that were arranged by the captains of these ships.

However, this state of affairs did not last long and high-speed sailboats were replaced by steamships, which, although they developed a lower speed, provided stable delivery, since they practically did not depend on the vagaries of the weather. Some time after that, "Cutty Sark" was used to deliver other cargo, and then it was turned into a training ship. Now this ship is used as a museum.

The name "Cutty Sark" comes from the poem "Tam O'Shanter" by Robert Burns, which tells of a witch who danced at a sabbath in a short shirt that hid little. This was seen by local drunkard Tam O'Shanter. The spectacle so captivated him that he even stopped hiding and was noticed by a swift witch who chased him. Tam barely managed to escape, and even then thanks to the horse, which as a result lost its tail. A sort of sermon about the dangers of drunkenness and lust. But the image of the witch fascinated not only the unfortunate Scottish drunkard, but also Captain John Willis, who was the owner of Scott & Linton. He then ordered the construction of "Cutty Sark". He did not dare to name the clipper after a witch, yet the sailors are superstitious people, and the church would not approve of this. But her nickname was quite suitable for this purpose.

The story of the legendary clipper has fascinated many people. And from March 20, 1923, its name also became the name for alcohol. Whiskey Cutty Sark produced at a distillery that is only ten miles from the shipyard where the clipper was built. Brand Cutty Sark belongs to the manufacturer Berry Brothers & Rudd (BB&R), which is best known for its wines. 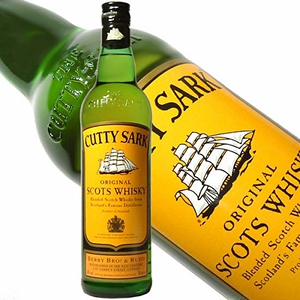 Several types of whiskey are produced Cutty Sarkthat differ in endurance - up to 25 years. You can distinguish them by the color of the label: although the yellow background is considered the main one, on bottles with 25-year-old whiskey it is dark blue. By the way, according to the official legend, the yellow color did not appear by chance. When artist James McBay drew the logo of a sailboat under full sail, he used a color that was as close as possible to the amber color of whiskey. However, the printing house failed to provide proper color reproduction the first time and accidentally received a bright yellow color. However, he liked it so much that they decided to leave it. By the way, with a close look at the logo, you can see one curious feature - the inscription under the sailboat speaks of "Scots Whiskey", instead of the usual Scotch Whiskey. In fact, there is no mistake, this is how Scotch whiskey is called in Scotland itself.

But according to the unofficial legend, the manufacturer Cutty Sark he was actively engaged in smuggling, illegally supplying his blessed drink to the United States, where prohibition was rampant in those years. This contributed to the growth of income and popularity of the brand, which today is considered one of the leading ones.