The year the distillery was founded De Kuyper (read as De Kuyper) is considered to be 1695, when a certain Petrus De Kuyper (Petrus De Kuyper) married Anna Kusters (Anna Custers). They lived in Rotterdam. Initially, the family business was engaged in wooden barrels for aging spirits, as well as the export of Dutch gins and beers. The production of home-made gin began only in 1729. For a long time, the range of produced alcohol was only gin and jenever (sometimes called Dutch vodka). In the 20s of the last century, the production of liqueurs began, which now play a huge role in the development of the company. 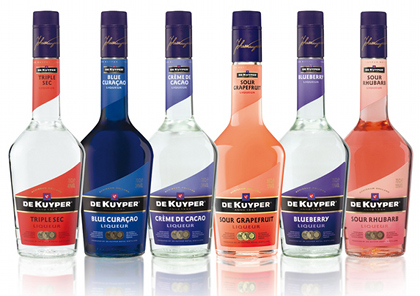 The most original is that for a long time the products De Kuyper was known in many countries of the world, with the exception of the Netherlands itself. The company entered the domestic market only at the beginning of the twentieth century - in 1930.

And to this day De Kuyper remains a family business owned by the De Kuypers. Their distillery is thriving and is considered one of the most successful in the world. Its production facilities are located in Schiedam, a small town on the outskirts of Rotterdam - the first large plant was built there in 1910.

Since 1995, the company has received from Queen Beatrix the right to be called "Royal". Since then, its full name has been De Kuyper Royal Distillers. The same year was marked by the acquisition Erven Warnink B.V. - a Dutch company known as a producer of egg liquor Advocate. Since then, this brand has been adding to the already good collection of brands that belong to De Kuyper. Some of them are known only in Europe (Butterscotch, Schipper Bitter), the rest worldwide (Mandarine Napoleon, KwaFen Lichee).