Sometimes it happens that the manufactured product becomes much more famous than its manufacturer. This is what happened in this case as well. For a long time no one remembers DMC, but the car it produces (and the company managed to create only one model), humanity will remember for a long time. This is the legendary DeLorian DMC-12, the car from the cult movie trilogy “Back to the Future”.

founded DMC engineer John DeLorean, who previously worked in General Motors and who managed to become famous as a developer of many interesting solutions and cars. Thanks to him, the brand was saved Pontiac (however, later, in 2002, it was abandoned anyway). He rose to GM to very high positions. He could have become president, but he was kicked out because of the bohemian lifestyle. Offended, John wrote a devastating book in which he revealed the true face of GM, showing the corporation as a real monster of imperialism - these memoirs were published with pleasure even in the USSR. Meanwhile, DeLorean decides to start producing cars of his own design. So, in 1973, DMC appeared - DeLorean Motor Company, and a year later its creation - DMC 12. 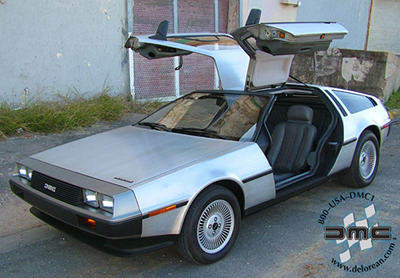 The DeLorian DMC 12 has a lot of unusual ideas and solutions. For example, the case was created from carbon fiber, on which stainless steel plates were then hung. On the one hand, the car was not subject to corrosion at all, and on the other hand, the body was very dirty and could not be painted, so that absolutely all the released models were indistinguishable from each other. The upward opening doors looked luxurious, but their complex design did not allow the use of banal power windows - as a result, the windows did not fall, only small windows were used for ventilation. The different diameters of the front and rear wheels may have given the car a peculiar charm, but it required the presence of two “spare tires” at once. But here's the look ... DeLorian (at that time) looked more like a spaceship than an ordinary car. Such a miracle could be forgiven for almost anything. Apart from the very high price. And the fact that, despite the sporty appearance, the DeLorian had a rather calm disposition - the installed not too powerful engine did not tell the car either the proper speed or dynamics. 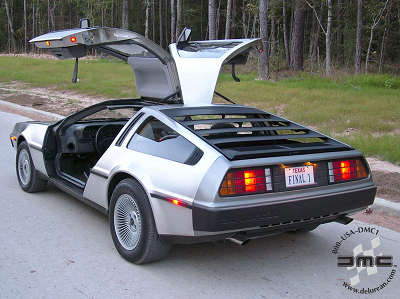 As a result of the shortcomings noted above, DMC Let's go, to put it mildly, it doesn't matter. The car attracted close attention, but the queue of buyers did not line up behind it. Trying to save the company, DeLorean goes to various dubious enterprises, it was rumored that up to the laundering of cocaine money. On which he was tied. The lawyers managed to “throw off” their client, but the company by that time (1982) had gone bankrupt. Later, unsubstantiated rumors appeared that the case was fabricated by other automakers, they say they were afraid of such a unique competitor (as was the case with Tucker). Other journalists claimed that they rigged everything GM, which never forgave John of that very book. There was also talk about the participation of the FBI in this case. In total, the company produced 9000 DMC-12s.

As for the unique car, it could have been safely forgotten if it weren’t for “Back to the Future”. Released in 1985, the film made a splash, as a result of which DeLorian becomes a real legend. Many years have passed since then, but the passion for this car does not subside. Moreover, he was reincarnated. This was done by a Texas company with the same name - DeLorean Motor Company, but that's a completely different story. The current manufacturer, although it has the rights to release DeLorian (the car is produced in small editions on special orders), to the “same” DMC has no relation. But it seems that DeLorean, who died in 2005, would only be happy with such a turn of events.