Blizzard I have always been able to create masterpieces. It happened this time as well. The popularity of the game has skyrocketed beyond all conceivable limits - in a few years more than 2.5 million copies of the game have been sold (and these are only licensed copies). Superb (at the time) graphics and excellent musical accompaniment, created by the composer Matt Uelman (Matt Uelmen), coupled with an exciting gameplay did their job. The ending was also unusual. Chance played a huge role in the game - the cards were drawn randomly each time, the armor and weapons each time came across very different, sometimes unique. 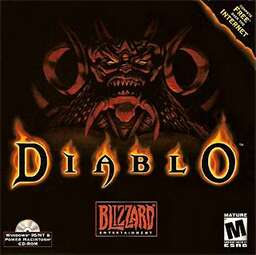 It was recognized as the best game of 1996. In 1998, the company Synergistic Software, subdivision Sierra, an extended version of the game was presented - Diablo: Hellfire, which added characters, levels and artifacts.

The success of the first Diablo led to the appearance in 2000 of the second part - Diablo II, where the graphics were improved and the game world was significantly enlarged. Now gamers around the world are looking forward to the appearance Diablo III.

Over the years, many different clones and imitations have been written. The most successful imitation was the series Titans Quest, companies THQ.