This brand was created by the union of two talented people - Californian tattoo artist Ed Hardy and French designer Christian Audigier (Christian Audigier). Both of them are world famous for their work. Hardy is even considered the "father" of modern tattooing, sometimes called the "king of tattoos." His work contains a variety of subjects and motifs, as well as reinterpretations of the work of other well-known informal artists such as Kenny Howard. And the portfolio of Odijje includes such well-known brands as Von Dutch, Bisou Bisou, XOXO, Guess, american outfitters, Lee, Diesel, Levi's, liberto, Naf Naf и Kookai.

branded Ed Hardy shoes and clothes are produced, decorated with drawings that depict the work of a tattoo master. We produce a wide variety of clothing for men, women and children. However, this product is not suitable for lovers of the classical style, it often contains overly bright elements, such as tigers, skulls and dragons. Ed Hardy is especially partial to the latter - one of his paintings depicts 2000 dragons at the same time. From some under Ed Hardy - it is also various bright accessories, such as watches, belts, handbags, glasses and jewelry. 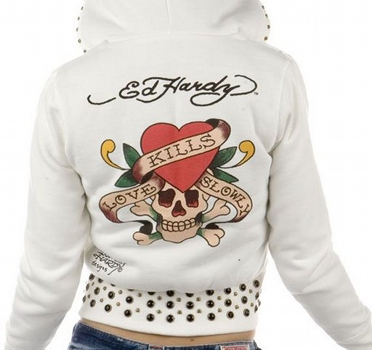 The brand was founded in 2004. Odijier then worked with Von Dutch, but left the company after meeting with the "tattoo king", inspired by a new idea - the idea of creating a clothing brand with elements of Hardy's work. By the way, at Von Dutch и Ed Hardy quite a lot of similar elements, based on the same principle and ideology of rebellion. It didn't take long to persuade Hardy. Popularity came almost immediately, which is not too surprising, given how famous the "founding fathers" are around the world.

Today the brand is known in dozens of countries around the world. Products Ed Hardy popular in all walks of life. Many Hollywood stars also wear it with pleasure.