The company's line of ultraportable devices ASUS. It is most popular thanks to netbooks - in fact, netbooks began their victorious march around the world precisely with the appearance at the end of 2007 of the miniature ASUS Eee 701 model with a 7-inch screen.

History has known many projects, the authors of which promised to create a laptop for $200. However, none of them managed to finish what they started. ASUS was the first to develop a commercially viable model. Maybe not too sonorous, but the catchy name arose from the merger of three "Easy" - "Easy to learn, Easy to play and Easy to work". True, the cost of new items was already $ 300, but that was not bad either. Especially against the background of the historical opinion that the smaller the laptop, the more expensive it is. The tiny Eee 701 completely denied this claim. 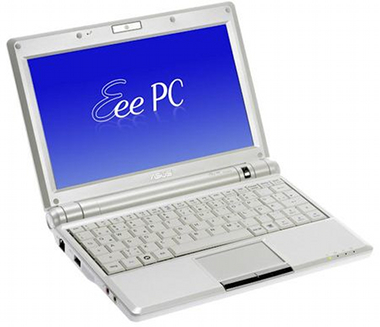 The device sold hundreds of thousands of copies in the first months of sales. Competitors at first stated that this was all temporary, that in the future sales volumes would fall. And then they themselves took up the production of computer equipment. Everyone is doing netbooks now, except Apple. Ubiquitous Samsung even announced his plans to become a leader in this market.

Netbooks were originally designed as "devices for the poor." True, in the future, against the backdrop of a rapid fall in prices for laptops, this positioning had to be changed. Now, the netbook is presented as a very small and light device that can be carried around all the time, in addition to the main computer. At the same time, its cost is not much lower (and sometimes, as is the case with a netbook from Nokia, even higher) than the average laptop, which has much better performance, though at a much greater weight. But apparently, size plays an important role - the popularity of netbooks is growing all the time (for example, this article was written on a netbook, though not ASUS, a Lenovo).