As you know, SEO is a very stressful job. But what about SEO? Apple, then doubly stressed. So, there is nothing surprising in the illness of Steve Jobs. The idea that he will soon leave his post has been going on for a long time. But who will replace him?

For several years, another employee of the Apple company, Tim Cook, was named as a possible candidate. In favor of this version, a variety of evidence was cited, based, however, solely on conjecture.

Now, it seems that the fans of speculation have a new candidate - this is the former chief executive of the company. Google – Eric Schmidt He held his previous position for about ten years. And left her only recently. 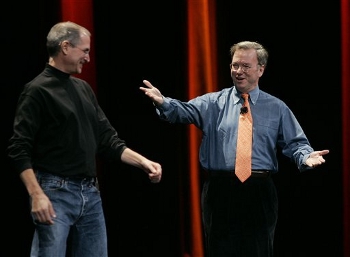 Moreover, journalists have already managed to ask a question about the possible appointment of Schmidt himself. He answered evasively. Add fuel to the fire and the memories that in the past, Jobs and Schmidt repeatedly met in an informal setting and discussed something.

In fact, one can only speculate about future appointments. How everything will turn out in the end - time will tell.