Under this brand, now owned Schwarzkopf & Henkel, which is included in Henkel Group, various personal hygiene and body care products are produced - soaps, shampoos, deodorants, shower gels, bath foams, hairsprays and the like.

For the first time products Fa appeared in 1954, on the German market. Distinguished Dreiring Werke - subsidiary Henkel (in those years it was still easy Henkel). The first product was a soap designed specifically for women, which was distinguished by the ability not only to wash the skin, but also to take care of it, which was a novelty in those years. The unusual ability of Fa soap quickly made him popular. By the way, according to the official legend, the name comes from the abbreviation of the word "Fa-ntastic". 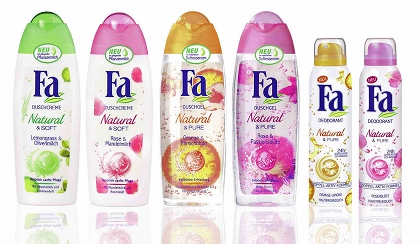 Soap in 1968 Fa updated its appearance, changed shape and received new flavors. It was then that iridescent yellow and green colors appeared on the logo and in the design of these products, which are used to this day.

The product range was expanded in the early 1970s with the introduction of the first spray deodorant. By that time the products Fa was already known in 46 countries around the world. By the way, they also knew about it in the USSR, only it was sold only in the Beryozka currency stores, which means it was available only to the elite.

In the early 1990s, products Fadesigned exclusively for the male audience - Fa MEN.

To date, products Fa known in more than 120 countries around the world. It is one of the most popular cosmetic brands. So, in 2007, according to research TNS Gallup Media, almost 5% of all liquid soap sold in Russia was Fa products.