Founded back in 1761, the German company Faber-Castell is the world's oldest manufacturer of office supplies. History has preserved the name of the founder. It was the artisan Kaspar Faber, who lived in the village of Stein, on the outskirts of Nuremberg (and until 1945, this German city was known primarily for the craftsmen who historically lived there) and was engaged in the production of furniture. Faber had one hobby - in his spare time he made pencils, both for the soul and for sale. The hands of the master created excellent things and these pencils were bought willingly. Soon the craftsman realized that he had no reason to deal with furniture, because his hobby had become very profitable. And so the company was born. A. W. Faber. Initially, a tiny handicraft industry was destined to become one of the largest players in the market.

After the death of Caspar Faber in 1784, the company passed to his son Anton. Then it was headed by the grandson of Kaspar and the son of Anton - Georg Leonard. Until 1898 the company was owned by the Faber family. Over the years, there have been many events in its history, many achievements, but no less failures. But A. W. Faber endured all hardships and continued to grow. In 1849, the first foreign branch was opened in New York, and Lothar Faber, who was at the helm of the company in those years, became the first German industrialist to reach the limits of the New World. In 1951, a branch was opened in much closer London, and then in 1955 in Paris. In 1861, the first foreign pencil factory was opened in New York. It is interesting that subsequently all the connections of this production with A. W. Faber were torn apart and formed an independent company Eberhard Faber Company. In 1874, a branch was also opened in St. Petersburg.

In 1862, Lothar Faber, for services to society, was awarded the title of nobility with the right to transfer it to his heirs. The prefix "von" was added to the surname Faber.

One of the most significant events in the history of the company took place at the very end of the 19th century. The heiress of the business, Ottilie von Faber, married Alexander su Castell-Rüdenhausen in 1898. So another surname appeared in the name of the company. A. W. Faber henceforth called Faber-Castell. Fighting knights became its logo, and the main color of the products was green (presumably the color of the regimental banner of the Castell family).

In 1906, a brand of colored pencils is born. Polychromos, which still exists and is very popular among artists.

The First and Second World Wars caused serious damage to the company. It has lost almost all production facilities abroad. It will take a lot of time and effort to restore rights later. All foreign orders were also lost. Fortunately, Faber-Castell I was able to get back on my feet fairly quickly. In 1948, a new product was introduced - mechanical pencils. And in 1949 the first ballpoint pen appeared Faber-Castell.

In 1950, the company logo was changed to a new one, more in line with the tastes of the time. However, later, in 1993, it was decided to return to the "classics" again. 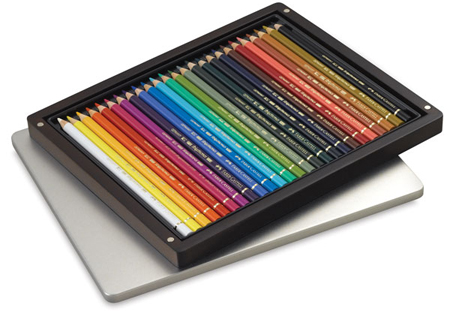