This "fashionable" Italian brand has been known since the beginning of the last century. In 1925, a married couple, Edoardo Fendi and Adele Fendi, opened a shop in Rome selling their own leather goods. Due to the fact that these products were very attractive in appearance and were of high quality, the store quickly became popular among Roman fashionistas. Things went so well that already in 1932 the couple expanded the scope of their activities and started creating fur products. They managed to ensure that their products were considered not only good, but also prestigious. Things were going uphill and everything was fine, but the outbreak of war put an end to many bright plans.

Having survived the Second World War, the Fendi couple began to revive their business, connecting their five daughters to it - Paula, Anna, Franca, Carla and Alda (Paola, Anna, Franca, Carla and Alda). Thanks to joint efforts, the family production was not only saved, but also returned to the luxury market. In the future, the management of the office fell entirely on the shoulders of these girls, each of whom took on their duties.

In 1952, the sisters decided to invite a professional designer, the German Karl Lagerfeld (Karl Lagerfeld). He then laid the foundation of the brand, making it the way we see it now. The designer also developed a memorable logo that is still used today (sometimes called Zucca – "pumpkin"). double letter F, apparently symbolizes the Fendi spouses. Carl is still the company's lead designer to this day. 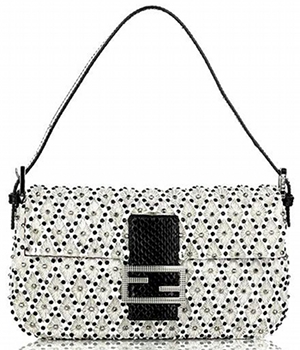 branded Fendi leather and fur products, glasses (including sunglasses), perfumes (since 1985) are produced. Jeans, ties and shoes from this manufacturer are also very popular. Contracts were signed with Swiss manufacturers to create watches with the logo Fendi. For a while, beginning in 1989, stationery manufacturer Cross produced custom-made writing instruments. Fendi.

Since 1999, the company has been part of the French holding LVMH.

Headquarters Fendi located in Rome, Italy (Rome, Italia). The brand is known almost everywhere - in all major cities you can find a company store or a boutique of the company (their number has long exceeded a hundred).

Famous rapper Kanye West sported a logo shaved on his head for some time. Fendi. Whether this was a paid promotion or whether West really loves these Italian products so much is not known for certain.