Free browser developed and distributed by Mozilla Corporation - a subsidiary of a non-profit organization Mozilla Foundation.

This browser is, in essence, the reincarnation of the once most popular Netscape Navigatorwho fell in the fight against Microsoft and her Internet Explorer (IE). In 1998 the company Netscape Communications Corporation admitted defeat and began to create a fundamentally new browser with open source. That's when the project was born. Mozilla Organization, named after Mozilla's cute lizard, an unofficial mascot Netscape. The project was considered independent; the same people who worked recently on the creation Navigatora. Some time in parallel with Netscape a browser called Mozilla. According to the official version, its development was a kind of test - something more was being prepared.

In the summer of 2002, a fundamentally new browser appeared - Phoenix, version 0.1, which was destined to become in the future Firefox. In 2003, the project becomes independent, is born Mozilla Foundation. In a fit of generosity, the company AOL, absorbing Netscape, allocates $ 2 million to the newborn and some specialists. In the future, the project will exist mainly on donations, being tax-exempt as a non-profit organization. Getting rid of scrutiny AOL benefited, the development became much more tangible.

There is a whole story associated with the name of the browser. Initially, as mentioned above, it was called Phoenix ("Phoenix"), as a hint of rebirth Netscape Navigator. But this word had to be abandoned - copyright belonged to Phoenix Technologies Ltd, the developer of the BIOS of the same name. AT Mozilla.org thought it would be logical to change it to firebird ("A fire bird"). And again, bad luck - this word has also been occupied, this time in the database environment. The third and last name was Firefox ("Fire Fox"). This time there were no copyrights. The browser received a beautiful, memorable name and an original logo. He immediately liked the users, whose number began to increase very quickly. It is not surprising - in the world of browsers there were clearly not enough players. IE never been a model of perfection, but Opera a lot of people didn't like it. Nevertheless, psychology plays a significant role in this matter - Ognelis has a kind of charisma, which allowed this browser to quickly win the hearts of many users. Especially among those who once used Netscape Navigator. 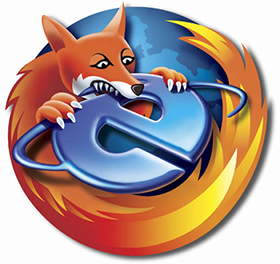 The real takeoff awaited Firefox in 2004, when it becomes truly known to a wide range of users. He was noticed, authoritative publications like Forbes wrote about him. A new star has lit up in the sky of the Internet.

Small, simple and fast "Ognelis" looked very positive against the backdrop of a monstrous IE and specific Opera. It was distinguished by high speed, undemanding to machine resources (later this "defect" was eliminated) and high security. He clearly lacked "knowledge" - he did not always correctly display complex pages. However, Opera suffered much more from this, and Ognelis got smarter with each new version. In addition, over time, the ability to change themes and connect additional modules that expand the capabilities of the browser has been added. And most importantly, he easily suppressed various advertising intrigues, which made surfing the Web many times more enjoyable. In a short time, the browser was ported to all popular platforms.

To date Firefox confidently takes second place and continues to build up potential. Many analysts predict a great future for him, up to the title of the leader of the world of browsers, which so far remains IE. Other competitors - Opera, Apple Safari и Google Chrome, although they are very well-known solutions, they do not suffer from excessive popularity.

But in the "mobile" market, things are not so good. Project Firefox for mobile devices, known as Fenec is not developing as well as we would like, although loud statements are still made from time to time. In this world, the palm belongs to Opera, in the back of her head "breathes" safari. And the reasons for global changes are not yet foreseen.

Unfortunately, with each new version Firefox becomes more and more “heavier”, his appetites for computer power grow. For example, on weak netbooks, it is much more comfortable to use Google Chrome, which, with smaller requests, provides a slightly higher speed.