James Leland was not only a good driver, but also a great tech savvy. It was common for him to improve this or that model of a serial truck with his own hands. This man spent a lot of time in the cab of trucks, delivering a wide variety of goods.

In 1929, Leland decides it's time to start his own business. So in Portland, Oregon (Portland, Oregon, USA), there is a transport company Consolidated Freight Lines. Success came quickly, but it soon became clear that there was a serious obstacle to further expansion - the trucks of that time simply were not able to cover long distances. Moreover, for a loaded truck, a steep slope could become an insurmountable obstacle. Thus, transporting goods between cities by truck was not possible. Leland believed that such transportation was the future.

He began to contact the leading manufacturers of the time. However, no one listened to his opinion. Then it was decided to start improving the existing truck models on their own. It was in the early 30s.

Leland was not afraid to experiment with materials. So, thanks to the use of aluminum sheets, it was possible to significantly reduce the weight of the car itself. Work was underway to improve the suspension. It was then that a truck was first created, in which the cab was above the engine - later this arrangement was called COE (Cab Over Engine). Thanks to this, it was possible to increase the volume of transported goods, without increasing the length of the truck itself. 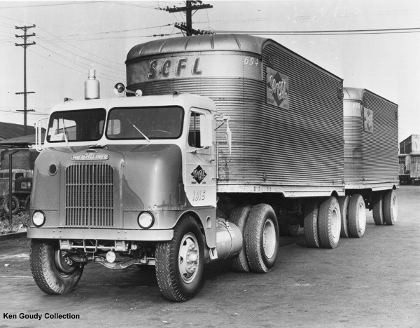 But in general, in those years, Leland did not think about the mass production of trucks, creating them exclusively for transport needs.

In 1939 Leland's company changed its name to Consolidated Freightways. And a year later, it merges with several more carriers, resulting in the formation Freightways Manufacturing Company Inc. This association was created with the aim of producing trucks exclusively to solve their problems. These machines began to be produced under the brand Freightliner (to be more precise, Freight Liner - this is how this inscription looked in those years). It was then that the idea to start commercial production was born. As a result, in 1942 appears Freightliner Corporation - subdivision Consolidated Freightwaysengaged in the production of trucks.

When the US enters World War II, truck production has to stop for several years. They will begin to be produced again in 1947, and after a few years, production volumes have increased to hundreds of cars a year (by the beginning of the 60s, this figure will increase tenfold).

However, the manufacturer experienced quite serious difficulties with the sale of its products. Therefore, in 1951, it was decided to join forces with the company White Motor Corporation of Clevelandthat took responsibility for the sale and distribution. This is how trucks carrying the logo appear White-Freightliner.

Mutually beneficial cooperation will last until 1977, when, due to financial problems with a partner, Freightliner Corporation terminates the agreement. By that time, up to 14,000 trucks per year were being produced.

In 1981, a contract was signed with Daimler-Benz AG. The German manufacturer went for a deal after selling trucks under the brand Mercedes-Benz failed in the US. Freightliner Corporation (both factories and brand) was bought from Consolidated Freightways. This had the most favorable effect on the development Freightliner.

Trucks Freightliner have long become a kind of symbol of the United States. Not surprisingly, they were repeatedly used in Hollywood action films.

By the way, in Europe, some of these models (the larger ones) are banned because they do not meet the stringent environmental requirements adopted there.

Headquarters Freightliner Corporation still located in Portland. Over the past decades, it has managed to break into the leading manufacturers of commercial vehicles in North America. Many other manufacturers were taken over. For example, in 1995 it was absorbed American LaFrancethat specialized in fire trucks. Since 1997 Freightliner owns a cargo division Ford - it is now known as Sterling Truck. Bus manufacturer taken over in 1998 Thomas Built Buses, and two years later Western Star - Tractor manufacturer. By the way, a solid percentage of the well-known American school-bus (school buses) is now produced under the brand Freightliner.

Production capacity Freightliner Corporation are no longer limited to the United States, but are also available in Canada and Mexico.