One of the most famous food brands in the world. It is a Spanish company headquartered in Barcelona, Spain (Barcelona, España). It was founded in 1936. Its origins are Luis Carulla, who is credited with inventing a special machine for making food concentrates. Together with his wife Maria Font, sitting in the kitchen, they were engaged in the production of bouillon cubes - she came up with new recipes, he twisted the handle of his typewriter. By the way, the then cubes were much larger and weighed 42 grams. Buyers appreciated the products, which quickly became popular. So much so that a few years later the couple opened the first factory. By the way, at first these bouillon cubes were sold under the brand Gallina de Oro ("Golden Hen").

Gradually, the range of products produced will expand. But a special success comes in 1954, with the advent of food concentrate Avecrem. 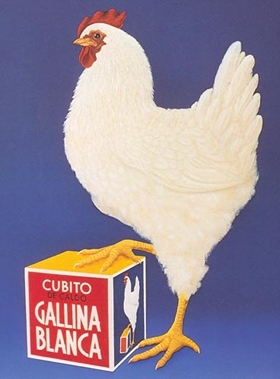 In the future, more and more new types of similar products appear, which, thanks to competent advertising, are quickly gaining popularity. Generally, Gallina Blanca ("White Hen") has always paid a lot of attention to advertising companies. Television, radio, printed publications, sports competitions, transport - all available means were used. In most cases, simple but easy-to-remember advertising was used. It seems that all the inhabitants of our country will remember for a long time "Gallina blanca", which is "bul-bul". The inhabitants of Spain were set on edge with phrases like Yo soy Juan Palomo. Yo me lo guiso, yo me lo como (“I am Juan Palomo. I cooked it myself, I ate it myself ") - thus emphasizing the simplicity and speed of cooking, which are also quite tasty.
Having become a leader in the domestic market in the late 70s of the last century, the Spanish company begins to conquer the world. The expansion turned out to be successful - today residents of 70 countries around the world are familiar with these concentrates. To Russia Gallina Blanca came in 1995.

To date, the company owns several brands, each of which is known mainly only in the territory of a separate country: for example, in Russia it is a seasoning "Aromatics", and on the territory of Ukraine - "Shvidkosoup".