This brand is considered the leading brand in Guatemala (República de Guatemala). Advertising of the beer produced under it can be seen throughout the country. Moreover, this beer has long been an element of national culture. But abroad it is known worse, and even under other brands - Famosa in the USA and Gallito in France. True, in Mexico, the Spanish-language name is preserved.

The history of the brand began in 1881, when the brothers Castillo Cordova, Mariano and Rafael (Mariano, Raffael Castillo Córdova), founded a small brewery, calling it Castillo Hermanos ("Castillo Brothers"). It was in the capital of Guatemala - the city of Guatemala. The Gallo brand (Spanish for "rooster") was born in 1896. The origin of the name is not specified, however, given the fact that it was founded by Hispanics, we can safely assume that the traces lead to cockfights. In general, in Latin America, this bird evokes associations that are completely opposite to those that arise on the territory of the former USSR. 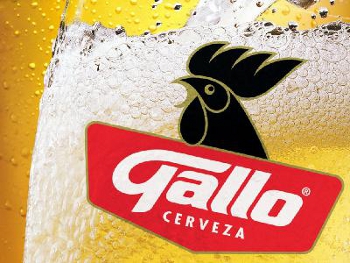 Gallo This is a light lager. It was so in the beginning, and so it remains to this day. During all this time, only two new varieties have appeared - Gallo Light, with a reduced number of calories and alcohol (4.2% versus the "standard" 5%), and Chopp Gallo, a distinctive feature of which are the containers in which it is sold - 30 and 50 liters .

Gallo too well-known and recognizable in the country, producers do not need to invent new varieties, thereby complicating the selection procedure for the client. Bars and restaurants across the country are hung with slogans "La Mejor Cerveza!" ("The best beer!") and "Tradicion y orgullo de Guatemala" ("Traditions and Pride of Guatemala").

Beer Gallo repeatedly received prestigious international awards. He is respected not only at home - for example, on American forums that are dedicated to Famosa you can find a large number of extremely positive reviews. So it's not surprising that Gallo is a real "Orgullo National" ("National Pride"). The brewery where this beer is produced is now called Cervecería Centro Americana Sociedad Anónima.