This Scotch single malt whiskey appeared at the end of the 19th century. The brand was created by William Grant, the owner of the distillery William Grant, now William Grant & Sons Ltd. The decision to expand the portfolio of brands (however, it would be more appropriate to say to expand the range of products, the word brand had not yet been invented in those years) came to him in connection with the desire to create an elite whiskey variety. Together with his large family (seven sons and two daughters), Grant began construction of a new distillery in 1886, which was completed by Christmas 1887.

Whiskey got its name in honor of the picturesque valley, where its production was based - Glenfiddich, translated from the Galic language means "deer valley". Accordingly, a deer was depicted on the logo. By the way, this word is not read correctly as "glenfiddich", but how "glenfiddich". More than a hundred years have passed since then, but the distillery Glenfiddich Distillery still owned by the Grant family. 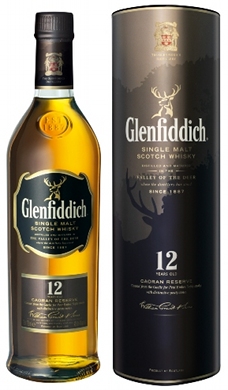 Glenfiddich Special Reserve 12 years - one of the most common whiskey in the world. There are also classic varieties aged 15 and 18 years. Very popular premium varieties with exposures of 21 years and 30 years. This brand also owns one of the most expensive whiskeys - Glenfiddich 50 Years Old, of which only 500 bottles were produced. All varieties have a fortress of 40 degrees. For their production, water from local sources is used.

A limited edition liqueur is also produced Glenfiddich Malt Whiskey Liqueur. This drink has not received much distribution and is in small but steady demand. It is sold in bottles of 0.5 liters.

Whiskey Glenfiddich repeatedly received prestigious awards. For some time, the company itself tried to introduce a reward for food products. Glenfiddich Food and Drink Awards was established in 1972 and lasted until 2008. It was decided to abandon it because of difficulties with choosing the winners.