perfume house Guerlain, one of the most famous enterprises in this area, has a rich history and almost two hundred years of experience. In addition to perfumes under the brand Guerlain skin care products and decorative cosmetics are also produced.

This story began in 1828 when Pierre-François Pascal Guerlain opened his perfume shop on rue de Rivoli in Paris. Later, in 1840 shop Guerlain appears on Rue de la Paix, perhaps the most “Parisian” of all Parisian streets and the most luxurious.

The art of mixing and creating fragrances brought Pierre-Francois Guerlain to where his talent could be appreciated - he was accepted by high society. Guerlain receives the title of Official Perfumer of His Majesty, his fragrances came to the court in every sense of the word, they were appreciated by both the French court and the foreign aristocracy. The famous fragrance of the house Guerlain Eau de Cologne Impériale, according to legend, was created especially for Napoleon III, on the occasion of his wedding. Also fragrances Guerlain used by the queens of Great Britain, Spain and other members of the royal families of Europe. 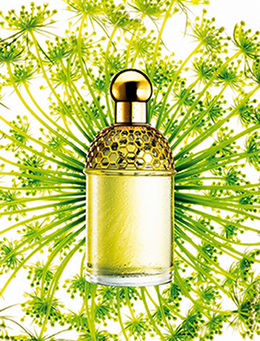 Two sons, Aimé and Gabriel, help the founder of the company in business, later, in 1864, after the death of their father, it is they who inherit the family business. Up until 2002 post of Chief Perfumer Guerlain was passed down through the family, but after the retirement of Jean-Paul Guerlain, great-great-grandson of the founder of the perfume house, the company began to invite outside perfumers, often to create one or more fragrances.

In 1994 house Guerlain was acquired by the holding LVMHthat specializes in "luxury" goods. From this moment on, the company ceases to be a family business, but acquires all the advantages available to a multinational corporation.