In the first decade of the 21st century, in front of the largest corporation in Korea - Samsung the question arose: in what direction to develop further, competition in the domestic market has increased and it has become increasingly difficult to remain in the lead. Considering the undoubted advantages of products Samsungsuch as thoughtful design and the introduction of the latest innovations in the electronic field, the path was chosen to move away from the mass market and expand the production of exclusive luxury products. An important factor was also the growth of wealth and purchasing power of the majority of Koreans. For more successful promotion in the market of exclusive goods, new brands have been created, such as RAVV is a brand for audio-video products and Hauzenunder which premium household appliances are produced. 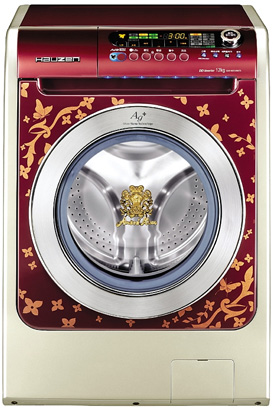 Among the products Hauzen a cleaning robot vacuum cleaner that not only looks chic, but also “differs in intelligence and ingenuity” - it cleans according to the map of the house, remembers where the areas have already been cleaned, where there are none, goes around the barriers; washing machines; air conditioners; "smart" microwave ovens; refrigerators for kimchi, a popular Korean dish; refrigerators.

Design of some models Hauzen designed by well-known Korean designer Andre Kim, and if you like the abundance of red and gilding, then kitsch-style household appliances will undoubtedly please, and the golden coat of arms, say, on the glass door of the washing machine, will delight. Such an extravagant design and high price of household appliances make them in demand only by a narrow circle of buyers, putting them on a par with such luxury items as, say, sports cars. Less fancy technique Hauzen available to many customers and widely distributed, unfortunately only within South Korea.