Slogan: Fur das Wertvollste im Leben
For the most precious thing in life

This story began in 1898, when a daughter was born in the family of confectioner Josef Hipp, who lived in the city of Günzburg, first, and a year later, twins. And everything would be great, but Josef's wife started having problems with breast milk, the woman was clearly not able to feed such a horde. By that time, the world had already heard about the milk formula, which was developed by the Swiss doctor Henry Nestle, the founder of the company Nestle. But it wasn't that easy to get it. Josef decided to try to make the product himself. He baked dry biscuits, ground them into powder and prepared a special mixture based on cow's milk. To his delight, the babies loved it.

Josef was an enterprising man and decided to commercialize the baby food he created. He sold it in his own confectionery, which the Hipp family had owned for about four centuries. Having heard about the story of the rescue of the twins, the locals were happy to buy this product (officially it was called Kinderzwiebackmehl Hipp). I even had to create a small factory.

By the 30s of the 20th century, things went so well that it became simply indecent to work at the level of a confectionery. By that time, the business had already passed to Georg Hipp, the son of Joseph. He founded the company Hipp Werk Georg Hipp OHG. It was in the town of Ptaffenhofen (Pfaffenhofen), where to this day the head office of the company is located. The production of formula was still largely manual.

The coming of the NSDAP to power did not have the best effect on the development of the family business - one of George's brothers ended up in a concentration camp for criticizing the new regime. George himself managed to avoid this fate. He moved to Munich and from there led the company until the end of the war. 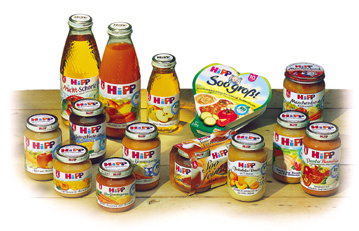 Although the Second World War was relatively painless, the post-war years almost killed the company. The year 1948 turned out to be especially difficult, when everything almost ended in bankruptcy. The invaders saved Georg - he managed to contact the Americans and get himself a large order for baby food for school canteens. George also managed to provide himself with such a scarce product as cocoa. The Americans provided the most favorable conditions. The business of the company, on whose products three generations of German children grew up, quickly improved.

In 1950, it became clear that only ground biscuits with milk were no longer enough for further development. Georg begins to expand the range. And by the beginning of the 60s, it already included a wide variety of nutritional mixtures, complementary foods and purees. Since 1958, all these products have been packaged exclusively in glass containers, which were much more hygienic and allowed you to see the contents.

And since 1960, all products hipp The beginning is produced exclusively using the latest bio-technologies. This idea was born in 1956, when Georg met the Swiss Hans Müller, who is now known as one of the founders of the so-called bioorganic method, when vegetables and fruits are grown in a special way, without the use of chemical fertilizers. In order to start growing his own ingredients, Georg specially bought an abandoned farm near Ptaffenhofen. Since then, bioorganic has been the basis of all products. hipp. In the future, agreements were concluded with many farms, which also switched to the use of the latest technology.

In 1967 Georg dies and the company is taken over by his son Klaus. He actively got down to business. Under his leadership, the company not only significantly increased its production capacity, but also expanded its range of products. That's when the motley logo appears. hipp, which is still in use today. By 1980 HiPP GmbH owned 60% of the German baby food market.

To date hipp is one of the most famous baby food brands in the world. Under it, the widest range of the most diverse products for the nutrition of children of various ages is produced. The company, which is still a family business, has several subsidiaries around the world.

In March 2010, Klaus Hipp revealed that despite the fact that the birth rate in Germany is falling, his company's revenues have grown significantly. The reason is that more and more elderly and old people in the country, who suffer from diseases of the teeth and digestive tract, began to buy food mixtures. hipp for yourself. Such mixtures are also popular among people who have had a stroke and in nursing homes.

However, according to Klaus, the company is not going to change anything in the positioning of its products or advertising. There are also no plans to create any specialized products for adults. 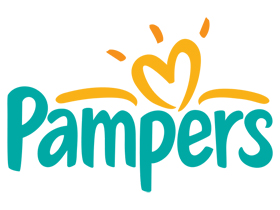