Hugo Boss A.G. - One of the most famous fashion houses, the brand produces classic lines of clothing, accessories and perfumes. Clothing lines for men and women (there is also a children's line) from Hugo Boss are produced under two brands: separately presented collections Boss, the main one has the name of Boss Black, and separately the clothing lines Hugo. In contrast to the classic Boss, brand Hugo is more unconventional and progressive. Another brand for "sophisticated" men and women, as the ads claim, Hugo Boss positions the brand BALDESSARINI. Also under the brand Hugo Boss The company produces accessories such as watches, sunglasses, and even cell phones (in cooperation with the Samsung). A separate important element of the brand is the production of cosmetics and perfumes.

The textile company was founded in 1923 in Metzingen, Germany shortly after the end of the First World War by the German tailor Hugo Ferdinand Boss. Founded as a family business, the company was initially a small store which grew into a small factory and provided uniforms for the social services - police officers, letter carriers and workmen's uniforms. The post-war crisis in Germany affected the company and soon, in 1930 Hugo Boss declares bankruptcy.

But changes in the social and political life of Germany gave the company an opportunity for revenge. In 1931 Hugo Boss, like many Germans, joined the National Socialist Party of Germany. And a year later the new party affiliation begins to bear fruit - from 32-33 and during the Second World War the firm Hugo Boss officially engaged in the production of uniforms for the ranks of the German troops, officers of the Wehrmacht, and other branches of Nazi Germany's power. According to some sources, in order to increase the size of production during the war, the factories Hugo Boss The labor of prisoners of war from Poland, France, and other countries was used. After the war, Hugo Boss was accused of collaborating with the Nazis and was fined and deprived of some civil rights, in particular the right to vote. 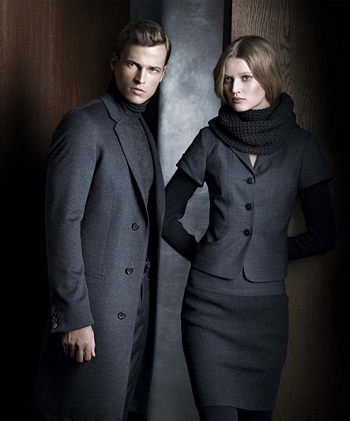 In the post-war period the firm returned to making clothes for letter carriers and policemen. In 1948 the founder Hugo Boss died, but the company continued to develop and in the early 50's the first men's suit appeared in its assortment. But only in '70 the company was fully focused on men's fashion (the first women's suit appeared much later - in 1998). Transformation Hugo Boss The new management of the company contributed a lot to the fashion brand as we know it today. In 1967, the Holly brothers, Uwe and Jochen Holy, the grandsons of Hugo Boss, took over the management. On the wave of the post-war economic boom in Germany Hugo Boss The company is growing rapidly to become Germany's largest and one of the world's largest clothing manufacturers and an influential fashion house.

In 1985, the company became a joint stock company, and the name now sounds like Hugo Boss A.G. In 1993, the company was taken over by the Italian group Marzotto.

In 1997, the company publicly acknowledged its collaboration with the Nazis. The announcement was prompted by the disclosure of hidden accounts in Swiss banks, which included the name of Hugo Boss, proving his association with the Nazis. Even then, they maintained that they had been completely unaware of this, arguing that there had been no mention of anything in the firm's archives relating to the service to the Nazi regime. To clear the company's image, it hired a historian to investigate the events that took place 50 years ago, as many other German companies accused of collaborating with the Nazis had done. As a result of the investigation, the company pledged to pay compensation to those who had worked for it under duress during the war.