Recently it became known that IKEA plans to open the first full-scale hypermarket, which will be located within the Moscow Ring Road.

It will occupy two floors of the Aviapark shopping center at once. This is a traditional format for the company - a very large store, located quite far from the city center and having an impressive area, sometimes more than 20,000 square meters. m. Today, IKEA Group owns more than 300 stores in countries around the world, some of them are franchised. The vast majority of these stores are hypermarkets. 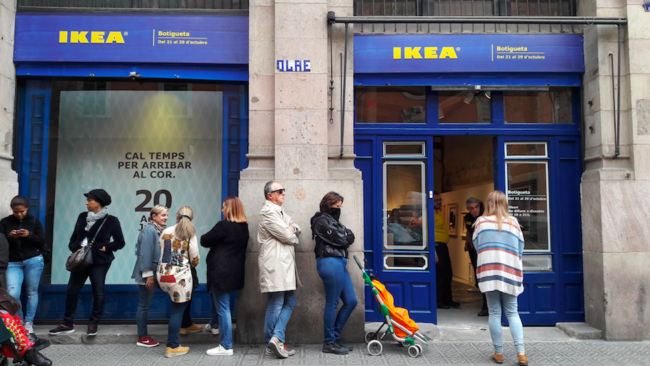 However, times are changing and the company is increasingly experimenting with store formats. Moreover, there is an assumption that if the company expects to continue to make a profit and increase revenues, then it needs to focus on small stores and online commerce. And it is in this direction that IKEA is now working.

Many modern families do not have (and do not want to have) a car. That is, they will simply not be able to get to the IKEA hypermarket and will prefer to order everything they need via the Internet. But not everyone likes to make such purchases, many people prefer to do it in a regular store, turning the buying process into a kind of entertainment. This means that the company should strive to open more stores within the city, not far from metro stations. And this can be done in shopping centers located within the city, as well as in old warehouses and factories, which often lose their importance and are absorbed by growing megacities.

Previously, the company has already begun to develop the format of the so-called. design studios - this is the name given to places where people could turn to IKEA specialists to help them plan the interior of the apartment and order everything they need. Several similar studios are already operating in Russia. But it is impossible to buy goods directly in the studio, it has a different purpose. Now we are talking about the massive emergence of small City Store stores with an area of a few hundred meters, about 10% from a typical IKEA hypermarket.

Naturally, a small area will not allow to accommodate the entire range of products. But after all, a hypermarket is not always enough for him. It is understood that visitors will not only get acquainted with the presented goods, but will also be able to place an order for any offer from the catalog. Another option is to display the minimum amount of furniture, the maximum amount of household goods. Well, those who need exactly furniture can always get detailed advice from sellers and place an online order on the spot.

Let's not forget about the possibilities of modern technologies. It is known that IKEA and Apple are working on an augmented reality application that will allow you to see the furniture you need “placed” in the interior of your home on the iPad screen. The user will have the opportunity to examine the sofa he is interested in from all sides, make sure that it harmonizes well with the wallpaper and the carpet, and only after that make a purchase. From launch, the app will feature hundreds of titles.

The City Store format has another advantage. It allows you to quickly enter a new market, gain a foothold in it and check its profitability, the initial investment in the project and the risks are low. And only then it will be possible to start building hypermarkets, if there is a need for them at all. Prior to that, years could have passed from the decision to enter the market to the implementation of this idea. For example, in Serbia, this process took as long as 10 years.

The City Store format isn't just for new markets, though. The company is gradually opening stores of this format in already proven markets, such as Western Europe. There are already several similar outlets in the world. At the same time, City Stores may have a specific theme. For example, one City Store in Madrid has a bedroom theme. The small size of a store of this format will allow you to quickly change the design and theme if necessary. Needless to say, all City Stores are equipped with the latest technology.

It is still too early to judge how successful IKEA's small store project may be. Various experts express directly opposite opinions. But one thing is clear - the brand IKEA is not static and is able to change, and the people leading the company are ready for innovations. So, most recently, an IKEA representative said that experiments with sizes will continue. It is likely that there will be stores that will be somewhere in between the size of the City Store and the hypermarket.

By the way, another experiment was also set up earlier - IKEA products began to be sold through third-party online retailers, like Amazon, Alibaba and others. In addition to the company's own Internet business.