Company's line of cameras Canon, all models of which have ultra-compact dimensions, limited functionality and are designed for non-professional and undemanding users. The brand appeared in 1996. Initially, film cameras were produced under it, but now exclusively digital ones. In connection with the unconditional victory of the “numbers”, the prefix “Digital” appeared in the brand name. Film models discontinued in 2002. 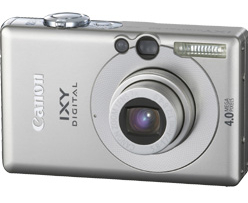 For more demanding users, Canon offers a line of powershot, whose models, although they are non-professional, differ in a much more advanced set of functions (and larger sizes).

It should be noted that the appearance of the cameras IXUS is very attractive, so sometimes other users mistakenly perceive the devices of this line as standing at a higher level in technical terms than powershot. Often this opinion is confirmed by the cost of devices - in the line powershot There are also budget models. However, by purchasing an even more expensive version IXUS, the user should know that money is not paid for technical “bells and whistles”, but for compactness, ease of use and design.