The history of Kinder Surprise is a story of Italian love of life and boundless dedication to one's work. She talks about the fact that in order to achieve success, you need not only to work hard and selflessly, but also not to forget to look around in search of inspiration and fresh ideas. It was precisely these principles that Michele Ferrero followed - the man who created one of the most popular delicacies not only for children, but also for adults - Kinder Surprise.

However, talking about the appearance of a chocolate egg with a surprise, you need to start with the story of Michele's father - Pietro Ferrero. It is he who is the founder of the well-known company Ferrero, which gave the world Nutella pasta, Raffaello sweets and Tick-Tock dragees. Pietro began to prepare various confectionery products in the early 40s in a small family bakery, and in this he was helped by his wife Pier and brother Giovanni. Persistent experiments with the ingredients paid off, and one day rumors about Ferrero's sweets spread throughout Italy. In 1946, the first Ferrero factory opens in Alba, and 10 years after that, the company enters the international level and opens representative offices in other European countries.

Ferrero products enjoyed unusually great success, but this did not prevent Pietro Ferrero from painfully experiencing the slightest setbacks of the company. Excessive unrest for the fate of his offspring and became the cause of his premature death. In 1949, the factory was almost washed away by a severe flood. And although the consequences of the raging elements were eliminated in a matter of time, the heart of the founder of the company could not stand the experience.

After the death of Pietro, his brother Giovanni took over the reins of Ferrero. But the hot Italian blood played a bad joke again. In 1955, the company found itself in a highly competitive environment. For a long time, Giovanni fought for a "place in the sun" with other entrepreneurs who worked along the same lines as Ferrero, selling similar products. Giovanni, in the end, managed to defeat them, but prolonged stress so undermined his health that a couple of months after the enemy was defeated, Giovanni Ferrero died. 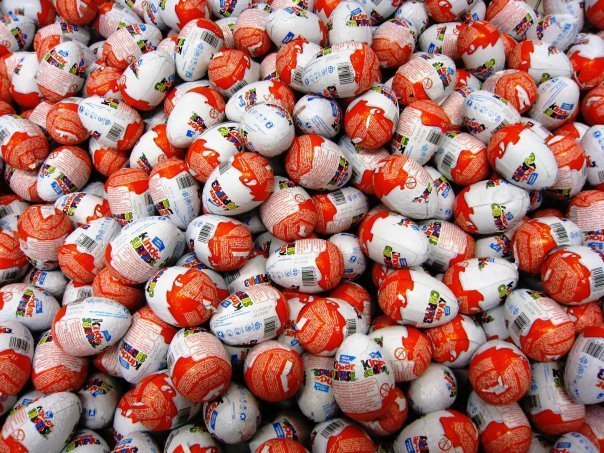 As a result of such tragic events, the family business passed to the 24-year-old Michele Ferrero, who, due to his youth, managed to breathe new life into the chocolate business. And one of the innovations he invented was Kinder Surprise. By the way, the young Italian did not even have to puzzle over his invention for a long time. The fact is that the very idea of a surprise inside a sweet is not new. Italians traditionally baked egg-shaped cakes for their children for Easter, inside of which they put a surprise - a toy or a coin.

And so began work on the creation of Kinder Surprise - one of the most beloved children's sweets today. “Surprise Eggs” were made from Kinder series chocolate, which was distinguished by a high milk content. Inside a layer of milk and white chocolate was a yellow capsule shaped like an egg yolk. A miniature toy was put into the capsule. By the way, a similar structure of Kinder Surprise was immediately secured by the relevant patents.

As for miniature toys that would fit inside the capsules, Michele turned to the Swiss designer Henry Roth for help in creating them. It is he who is behind most of the funny figures, which later hid inside Kinder Surprise chocolate sweets.

The first "surprise eggs" saw the world in 1972. And they were sold out in just an hour from the moment they first appeared on the shelves. So suddenly the beginning of a real mania was laid, which instantly swept the whole world. Admirers of goodies were also found among adults who readily rushed to collect unusual toys. Even today, many rare miniature figurines are priced in excess of thousands of dollars. A collection of 90,000 Kinder Surprise toys was sold on e-Bay in 2007 for 30,000 euros.

Over the following years, Ferrero produced Kinder Surprises both with molded plastic toys and with various prefabricated options. But perhaps the most interesting and unusual are the series of iron figurines. The first were metal cowboys and Indians, designed by Henry Roth in 1974. They were followed by figurines of ballerinas, then - sea pirates and just representatives of different professions. Each new thematic collection was released every year and invariably delighted collectors and just admirers of Kinder Surprise.

Michele, meanwhile, showed himself not only as a competent leader of a multi-million dollar company, but also as a devoted family man. When his sons were born, he named them Pietro and Giovanni - in honor of his father and uncle, who once founded the Ferrero company and were devoted to her until the last breath.

It was the younger Pietro who took over the reins of business when Michele decided to retire. However, in 2011, a 49-year-old Italian died of a heart attack while on a business trip to South Africa. After the death of his son, 85-year-old Michele Ferrero, the richest man in Italy and the owner of a fortune of $ 17 billion, again stood at the helm of his company and does not intend to leave his post anymore.