An e-book distribution and reading platform that includes both software and hardware. Created Kindle In 2007, the company Amazonbest known as the world's largest online bookstore, originally specializing exclusively in books.

At the word "Kindle." most consumers remember, first of all, it is a device for e-books with a screen based on electronic paper - the so-called "book reader". As of today Amazon has already introduced several book reader models, the first of which went on sale the same year in 2007. The device attracted so much attention that Amazon The company did not manage to supply it in the necessary quantities. In addition, the company clearly did not count on such demand and did not stock enough book readers for the beginning of sales.

It is safe to say that Amazon Kindle - one of today's best book readers. And the popularity of this device is promoted by its rather low cost - the producer receives income from the sale of books and periodicals. In addition, you can buy a cheaper version - in this case you will sometimes have to look through advertisements, which do not, however, interfere with reading. All devices Kindle are always connected to the Internet via Wi-Fi. And later models also have 3G. By the way, in the latter case, the Internet use is paid for by the AmazonThat is, you can surf almost anywhere in the world (and, as a consequence, you can buy another book at any time on the Amazon). The device supports most of the most popular e-book formats, excluding FB2. However, converting to it is not a problem. 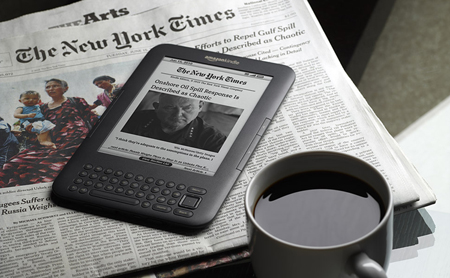 But Kindle - is not only a device, but also software for a wide variety of platforms. By installing it, you can turn it into a reader and get access to the e-book store Amazon virtually any device. PCs and Macs are supported, as well as mobile devices running iOS, Android и BlackBerry OS.

May 2011 was marked by the fact that the number of e-books sold exceeded the number of conventional paper books, in both paperback and hardcover together. Contrary to the predictions of many skeptics (the most famous of which was Steve Jobs, the founder of Apple), things on this front are Amazon went more than well. As of today. Kindle can provide users with millions of books, and all those published before the 1920s are free (unless, of course, we are talking about a special version).