Unfortunately, the history of the automotive industry knows many examples when a promising brand goes into oblivion. Moreover, everyone forgets about it, except for people interested in automotive history. This was the fate of the German manufacturer Komnick. But it all started out pretty well.

In 1906, Franz Komnick, a resident of West Prussia and the owner of a small factory F. Komnick Hotop, for the production of agricultural machinery, decides to take up cars. For this, a new enterprise is being created, called Automobilfabrik F. Komnick. A year later, the first cars Komnick presented to the buyers. 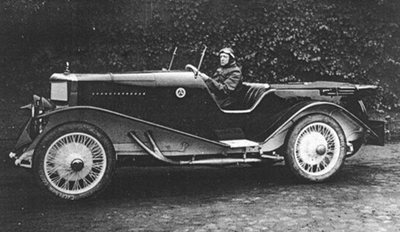 And it should be noted that the first pancake did not come out lumpy at all. Attractive cars of their own design proved to be very reliable and unpretentious. The manufacturer actively exhibits them in competitions, where his creations win many awards, which makes them an excellent advertisement. Cars Komnick are starting to be sold all over Europe.

In 1912 the company changes its name to Automobilfabrik Komnick GmbH. The production of trucks with a carrying capacity of several tons begins. The model range of agricultural machinery is expanding, which no one thought to forget about. The company is doing great.

Trucks Komnick served the Kaiser troops well during the First World War. But the defeat of Germany hit the company very hard. But work at the plant continues, although trucks are already being produced, mainly. Attempts are being made to create new models, to improve existing ones. It is possible that Komnick would have managed to resist, but the crisis of 1929 turned out to be an insurmountable obstacle for her. A year later, all remaining assets were bought out by another German company - Heinrich Bussing AG. As for Franz Komnik, he outlived his brainchild for a long time, surviving until 1938.