Company Apple knows how to create legends. Moreover, these include both the devices themselves and the history of their appearance and development. It is logical - buyers take such products much better than any other, solid, but devoid of such charisma.

Let's take, for example, iPhone - a device that made so much noise. What do we hear most about him? That's right: the first myth - Apple was the first in the world to create a phone with touch controls, and behind it they have already begun to catch up and Samsung, and Nokia, and Sony Ericsson. Actually, it is not. Or rather, not at all. Touchscreen phones have existed long before iPhone (an example of this would be models from Qtec). For the most part, these were rather exotic devices running Windows Mobile (essentially, a PDA with an added GSM module). Of course, they could not compete with the appearance of "yaMobilco", but they worked well.

Other people easily destroy the first myth, often naming the second instead - in fact iPhone this is the first "touchphone" with a finger-oriented interface. That is, it is controlled only by means of fingers, “poking”-styluses are no longer needed. However, this is not so! Officially, the first such device was LG Prada, which appeared at the very end of 2006, about a month before the presentation iPhone. And imagine the chagrin of the Koreans when the impudent upstart who came second took away all their legitimate laurels! At the management LG the thought even crossed my mind to apply for Apple sued for stealing interesting ideas. But they stopped in time - there was clearly no theft here: the specialists from Apple create a new device based on borrowed ideas in just a month. 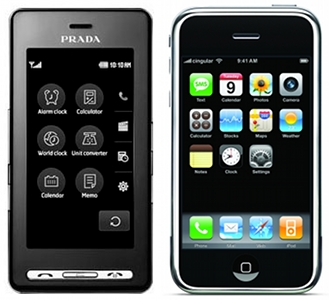 Success iPhone, in principle, is understandable - he has much more charisma than the same Prada. Yes and Apple fans at all times was much more than LG. Interface iPhone unlike an example, it is more convenient and interesting, ample opportunities when working on the Web. The excellent work of the advertising machine also had an effect. Apple. For example, rumors about the "apple phone" appeared back in 2004. All of them were constantly refuted by the company itself, which claimed that they did not even think about it. But the rumors did not think to subside, but periodically surfaced again and again. By the end of 2006, no one doubted that iPhone be; everyone was just wondering what it would be like, anticipating innovation after innovation. And we were looking forward to it. It seems to me that there was a controlled leak of information, when PR people themselves deliberately spread rumors, refuting them in the future, thereby constantly warming up interest in a new product that has not yet been released. As a result, there are huge queues of those who want to buy this miracle among the first. iPhone It's not even a phone. It is rather a very loud and prestigious brand, the value of which is constantly increasing.

I do not want to indulge in frankly annoying disputes on the topic "iPhone good or bad". This is done by all and sundry, on the resources of a variety of subjects. But he tried to dispel both myths. Although, everything written here does not detract from the merits Apple. After all, it is iPhone managed to influence the industry as a whole so much. Apple created not just a “loud” brand, but something more.

The company had never dealt with cell phones before, but the first (and, in fact, the only one, since all subsequent versions are only technical improvements of the first, practically without changing even outwardly) model made a real revolution in the minds of consumers. I doubt very much that Prada could make such a revolution! Talking about brand value iPhone one cannot fail to mention such a moment - until now, many consumers refuse to accept phones from Korean companies; LG и Samsung they associate with household appliances, but not with “mobiles”. And this despite the fact that both companies have an excellent range of models and have been present on the cellular market for quite a few years. Apple I have never encountered such a problem (although many, especially fans of companies such as Nokia и HTC, scold the "apple" phone for the lack of excessive technical bells and whistles).

By the way, if we make an excursion into history, we will find out that the first phone with a fully touch control was a device from IBM, companies generally quite far from the world of cellular communications. IBM Simon, which appeared in 1993, was innovative in everything. This is the first smartphone in history (yes, the first smartphone was not created at all by Nokia - here is another widespread myth), and the first "touch phone" in history. True, there was no finger-oriented interface, then they simply didn’t think about it - you could still use the main functions with your finger, but to type a long message (for example, when sending a fax), you still had to climb for the stylus. 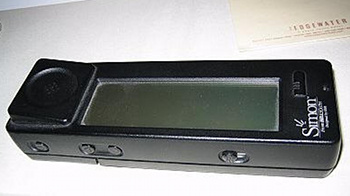 But, as is often the case, the device was ahead of its time. The public simply did not accept such a sophisticated gadget weighing half a kilo, and even at a price of almost 900 US dollars at the then exchange rate. Simon was clearly ahead of the curve. IBM somehow quickly lost interest in the world of cellular communications. It's a pity.
Total
0
Shares
Share 0
Tweet 0
Pin it 0