According to the rating "Favorite brands of Russians 2018" published by OMI, the South Korean company Samsung has been ranked first for 8 years in a row - 18.3% of respondents voted for it.

Also, this brand took first place in the rating in the categories "Household appliances", "Smartphones" and "Electronics".

If we compare the rating of favorite brands with previous years, we can see that, in general, the preferences of ordinary Russian consumers do not change too sharply. So, the list of the top nine favorite brands has not changed at all for three years now, only their positions have changed, and even then not much.

The lists after the tenth position look somewhat more “dramatic”. Here you can see much more interesting changes. So, Nokia finally left the list of favorites, although in 2010 this brand occupied a leading position. As for Toyota, this brand clearly has a difficult relationship with the Russians - it either appears in the ranking at fairly high positions, or it completely drops out of it, as this year. However, in the 2018 category ranking, it ranks first in the Car category.

Sportswear manufacturers Nike and Adidas are confidently among the "favorites", since last year Puma also managed to get into the list. As for casual wear, Zara has been winning the hearts of Russians for 7 years in a row. For the past three years, O'stin brands have also made it into the rankings (this year the brand also took first place in the Apparel category) and H&M.

Added to the list and daring newcomer in the face of Xiaomi - when the first products of this Chinese manufacturer appeared on the market a few years ago, most perceived it as cheap consumer goods. The other two newcomers to this year's favorite brands are McDonald's (18th and #1 in Cafés & Restaurants) and Mercedes-Benz (20th favorite and #5 in Autos).

It is difficult to say how objective such ratings are. But for a general assessment of the market picture, they are quite suitable. If you read the reviews of the users themselves about this rating, then the opinions vary in a wide range - from interest to complete distrust. 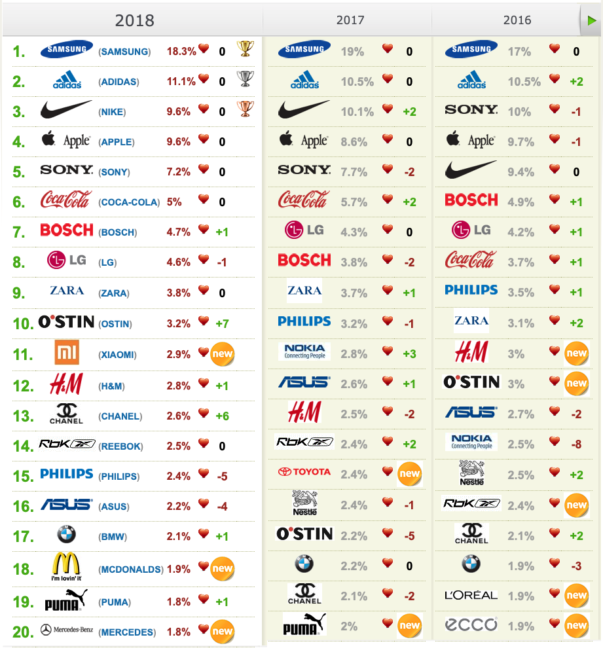 Established in 2005, OMI (Online Market Intelligence) specializes in online marketing research. She has been doing research on the theme “Favorite brands of Russians” for 11 years now. About 1,500 people aged 18 to 55 years old, living in different Russian cities with a population of over a million, take part in these studies. The survey usually uses online panels created by OMI itself.