Some time ago, a chain of stores madhouse introduced men's jeans with a playful label, which, in addition to information about the temperature of the water and the iron, was written advice, according to which the best way to clean up your trousers is to give them to your woman. 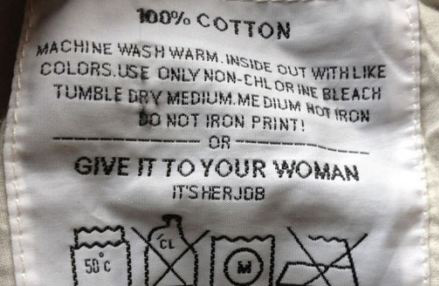 Naturally, this was done for advertising purposes. And it should be noted that the number was a success - photos of an unusual label spread all over the Internet, madhouse imitators emerged.

However, a harmless joke led to serious accusations. The company was hit with a hail of accusations of sexism. True, no one filed a lawsuit, but reports in Twitter a lot has been written. However, many users of the social network expressed bewilderment at such an aggressive reaction. So a whole debate ensued. The company itself did not respond to such statements.