Liquor Malibu was born in 1980 in Curacao. In essence, it was a simplified variation of the alcoholic cocktail Piña colada (Piña colada). Malibu - This is rum mixed in certain proportions with coconut flavors and sugar. The alcohol content is 21%. This is one of the most famous alcohol brands.

Malibu was originally mass-produced by West Indies Rum Distillery Ltd., later - Diageo. In 2002, the owner became Allied Domecqwho later resold it Pernod Ricard. Changes of owners in no way affected the taste of the liquor or the design of the bottles, white and easily recognizable (the only exceptions are limited editions, designed with the participation of famous designers).

By the way, due to the milky-white color of the bottle, it is often assumed that the drink itself has a similar color. In fact, it is transparent and slightly more viscous than regular rum.

To date the taste of liquor Malibu It is considered one of the most refined among strong alcoholic drinks. And it is produced annually about 30 million liters, which diverge around the world. Liquor is used as an ingredient in many different cocktails, used in cooking, but most often drunk in its pure form. Cocktails that use non-alcoholic drinks are very popular, most often Coca-Cola. 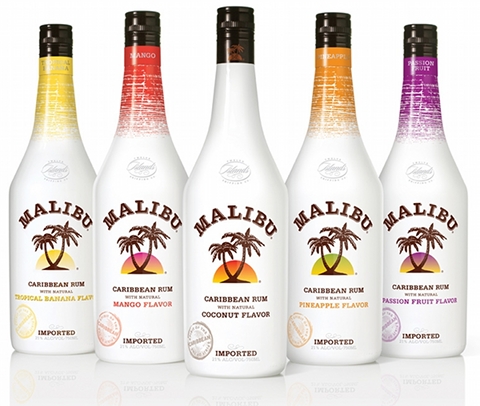 At the beginning of the 21st century, variations begin to be produced Malibu, on other flavor bases - mango, passion fruit, pineapple, banana. But the most popular is still the classic coconut liqueur.
Total
0
Shares
Share 0
Tweet 0
Pin it 0