Arket is a fashion brand (11th in a row) owned by the Swedish company H&M. Under it, clothes for women, men and children are produced. Arket occupies a rather narrow niche between other H&M sub-brands - COS, with its functionality, and & Other Stories, with its non-standard. H&M specialists managed to achieve what they wanted, the new brand successfully fit into the “family” of sub-brands, supplemented it, without compromising any of the “relatives” at the same time.

The word "Arket" is Swedish for "sheet of paper". The official legend says that this is a reference to the Nordic roots of the brand, to the Scandinavian tradition of functional, durable design with its characteristic minimalism. It is difficult to assess how much a paper sheet is associated with minimalism, but it must be noted that the naming specialists have done an excellent job. After all, such a name is short, well remembered and pronounced the same in all European languages. As for the logo, it really is an example of minimalism. However, like other H&M sub-brand logos. 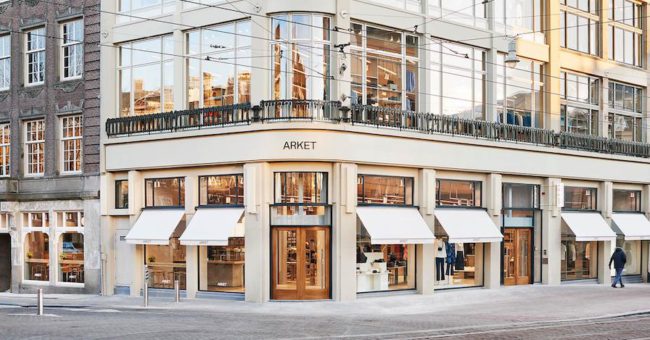 The history of Arket officially began on March 30, 2017, when H&M officially announced its intention to create a new brand in the next three-month report, under which clothes for women, men and children, as well as accessories and household goods will be created.

The brand's first flagship store opened in the autumn of the same year in London, on Regent Street, a street famous for shops and restaurants. Somewhat later, the Arket online store (www.arket.com) was launched, operating in 18 European countries. The headquarters and design studio of the brand is located in the home of H&M in Stockholm, Sweden.