A world-famous manufacturer of tires for bicycles, motorcycles, various types of cars, heavy equipment, special equipment and aircraft. In addition to its main brand, it also owns such well-known brands as Kormoran, Taurus, BF Goodrich и Uniroyal. Known Michelin and their guides (Le Guide Rouge) for various countries. These guides have been published since 1909.

And it all started back in 1830, with a small company that was founded in the French city of Clermont-Ferrand (Clermont-Ferrand). The city is still headquartered in this city. Michelin. It was founded by two brothers - André and Edouard Michelin (André Michelin, Édouard Michelin). Initially, everything was produced in a row. The brothers experimented tirelessly, driven by the desire to find the most optimal and profitable production for themselves, until they came to the production of bicycle tires. Our familiar name is Michelin - the company received much later, in 1889.

In 1891, the company patents a replaceable pneumatic tire. Using such tires, cyclist Charles Terront won the Paris-Brest-Paris cycling marathon in 1891, which served as the best advertisement, as a result of which the company's revenues quadrupled. The very idea of a pneumatic tire belongs to John Boyd Dunlop (John Dunlop), whose name is now another major tire manufacturer. Except Dunlop's tire was firmly glued to the wheel.

Initially, few people took such tires seriously, since their first versions often suffered from nails that thickly covered the pavements of those years, falling out of horseshoes. But riding with their use was much more comfortable. The company believed in its offspring, continuing developments in this direction and, in the end, proving its promise.

Later, with the spread of cars, tires for them also begin to be produced. They were used on the very first self-propelled wagons with steam and electric engines. Cars rapidly became popular, and income and influence grew. Michelin.

Over the years of its existence, the company Michelin absorbed many other tire manufacturers from different countries. Most of these acquisitions took place in the second half of the last century. From 1930 to 1976, the company owned an automaker Citroën. In 1988, the American tire manufacturer was taken over Uniroyal, together with which Michelin moved away and the tire business B. F. Goodrich. 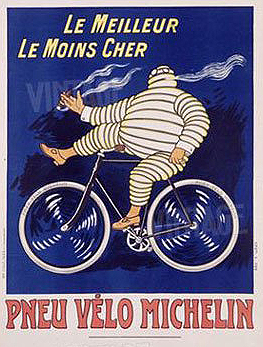 Michelin owns many unique developments and innovations in the tire industry - for example, radial tires, airless tires. The company's plants are located in many countries around the world, including Russia. Michelin tires can now be bought almost everywhere - the number of tires produced has already exceeded a hundred million a year.

Until 2006 Michelin, as well as Bridgestone was a tire supplier for Formula-1. However, after the scandal in the summer of 2005, when during the US Grand Prix, on suspicion of safety problems, all cars with tires were removed from the track Michelin (only six cars remained on the track), the company defiantly left the F-1. Since then, the ball rules there Bridgestone.

Talking about Michelin, it is impossible not to tell about such a famous character as Bibendum - a man from tires. The year of his birth was 1894, when at one of the exhibitions the designer decorated the company's stand with a stack of tires of different diameters stacked on top of each other. Edouard Michelin, who had a rich imagination, saw in this mountain of tires a fat man, devoid of only arms and legs. But the idea for the character would never have taken shape if it weren't for advertising artist O'Galop, who once showed Edward one of his sketches for a beer advertisement, which depicted an exceptionally fat brewer with a mug in his hand. He then reminded Edward of the "tire man". And so this famous character was born, who would later be called Bibendum. This name was born from the exclamation of the ancient Roman poet Horace - "Nunc est bibendum!" ("to drink, so now!"), which crowned the very picture with the brewer. Edward decided to keep it, pointing out that the pneumatic tire seemed to "drink" all the bumps in the road. By the way, on the first advertising posters, Bibendum was depicted with a glass (instead of the mug that the brewer held) filled with various street garbage. Subsequently, the glass and the phrase were abandoned because they hinted at alcohol, which is incompatible with driving. 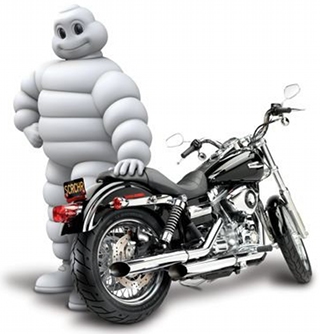 In the 30s of the last century Michelin received rubber from Vietnamese plantations, where more than 30,000 workers worked. Conditions on the plantations were nicknamed "hell on earth" and caused the death of several dozen workers (according to official figures). This led to the fact that in 1930, 5,000 workers raised an uprising that went down in history as Phu Rieng Do - the first ever labor movement in Vietnam against the French colonialists. It was quickly and brutally crushed by French troops.

In 1948, the Citroën 2CV was introduced to the world, destined to become one of the most popular in the world and will be awarded the title of "the ugliest car in history." In those years Citroën already belonged Michelin, so it's clear who made the tires for the novelty. So, these tires are still on sale, because a very large number of Citroën 2CVs, which were produced right up to 1990, are still driving around the world.

There are two types of guides Michelin - "Green" and "Red". The first one is interesting in that it maintains a rating of restaurants and cafes - each establishment is assigned one or more stars (three is the maximum, which means a great establishment), depending on how highly it was rated by agents Michelin. Getting even one star is very difficult, and losing it is easy, so it's not surprising that the owners of "star-infused" eateries are very proud of this fact. However, the mere mention of a restaurant in the Red Guide, even without awarding a star, is already extremely prestigious. The most interesting thing is that no one ever notifies the owners about the imminent arrival of an agent, this event happens incognito (at least that's what the official information says). So it is impossible to prepare in advance for the meeting of a dear guest, as is usually the case in the best Soviet traditions. The rating is updated every year. All this is brilliantly described in Gerald Durrell's story "The Michelin Man", which was included in the book "Picnic and Other Disgracefulness".

Sometimes the star is awarded not to the restaurant, but to the chef. This means that any restaurant in which this chef will work in the future becomes a "star". Such a star is the best recommendation for representatives of this profession.

There is a well-known case of the suicide of a chef who killed himself after learning that the restaurant had lowered his rating from three to two stars.