Video hosting service YouTube announced a new record: the total number of views of various videos through its mobile version exceeded 200 million times a day. This figure is almost three times higher than in January 2010. These results were achieved thanks to the growth of smartphone users, many of which already have a pre-installed version. YouTube. 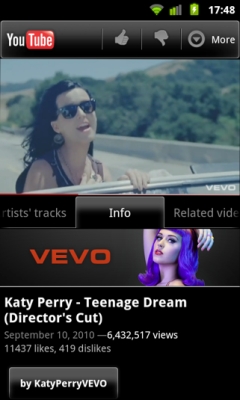 In addition, an updated version of the YouTube 2.0 application for devices running the operating system was announced. Android. It is reported that the updated mobile version of the service will contain more opportunities for advertising applications, and will also show advertising inserts from partners in a larger volume. YouTubesuch as a music site Vevo.

The updated version will also include some user-friendly details, such as being able to see artist information next to the video, or view other videos by the same artist, etc. So far, the changes have affected only smartphone users under Android, but we can expect updates for other mobile platforms soon.