The brand belongs to the company midway games, which specializes in the creation and distribution of video games. Mortal Kombat (MK - precisely through "K", and not through "C") - a very popular series of fighting games (simulating hand-to-hand combat between two characters). The game was originally developed for slot machines, and now exists exclusively for game consoles. The first versions were two-dimensional, the player watched the characters from the side. Starting with the fourth version, the game has become three-dimensional.

Mortal Kombat appeared in 1992, the reason for its creation was the success of the game street fightercreated by the company capcom. Initially, the emphasis was on realism with a maximum of blood (subsequently MK repeatedly criticized precisely for excessive cruelty). The creators of the game - programmer Ed Boon (Ed Boon) and designer John Tobias (John Tobias). Interestingly, when creating characters, even for the first version MK video filming of live actors was used, despite the fact that the developers in those years still used hand-drawn graphics. According to the plot (heavily mixed with Asian mythology - hence the dragon on the logo), the best warriors are involved in protecting the Earth from all sorts of evil spirits from parallel worlds. In the first versions of the game, tournaments were held exclusively on Earth. Later the universe MK has been greatly expanded. To date, there are more than a dozen versions and branches of the game. 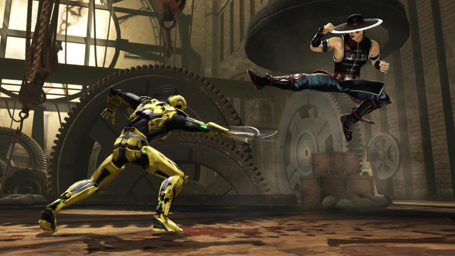 The appearance of the game Mortal Kombat, in which blows led to a lot of bloody splashes, and the defeated enemy had to be finished off, led to the emergence of the organization Entertainment Software Rating Board, which deals with the issuance of age ratings for video games.