One of the world's largest manufacturers of stamp inks for a wide variety of applications, for printing on various surfaces, whether it be paper, rubber, wood, glass or even meat. The company produces hundreds of tons of ink annually, sold all over the world.

The history of this manufacturer began in 1892, when the company was founded Chemische Fabrik Nürnberg, Dr. John & Breitschopp. Trademark nokis appeared later - initially only stamp pads and ink for them were produced under it. Two years later, they were already sold in full in the countries of Western and Eastern Europe. In parallel, the company was actively engaged in the development of various types of paint for clothes. 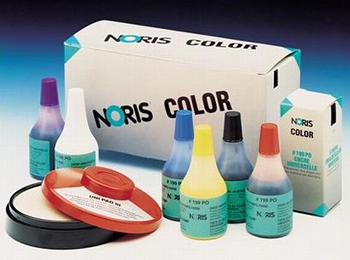 The First and Second World Wars did not have the best effect on the development of the company. It was especially difficult in the 40s, when the production facilities were destroyed by Allied air raids. Recovery was slow, everything was produced - cuttings, shoe-cleaning and personal hygiene products. But the production of ink was gradually resumed.

By 1948, it was possible to more or less firmly stand on its feet. Gradually, the company returned to its original occupation. There were practically no particularly interesting episodes in its subsequent history, new markets were conquered, and the range of products expanded. Production volumes grew, by 1991 it was necessary to build another factory. In 1993 the name of the company was changed to NORIS COLOR GmbH.

The manufacturer's headquarters is located in Kulmbach, Bavaria (Kulmbach, Bayern).