OLPC Foundation is a non-profit, tax-free organization whose goal is to create an inexpensive laptop for use as a teaching tool in schools, especially in developing countries. Concept OLPC also known as the "hundred dollar laptop".

Seymour Papert, Nicholas Negroponte and Alan Kay are among the founders of the organization. The principles they developed are outlined in Negroponte's book Being Digital. Such well-known companies as Google, AMD, Red Hat, Intel (later left the project) and some others.

The concept of the required device was jointly developed. First of all, such a device must be very durable, be ready for falls and strong shaking. It should also be as easy to use as possible - for example, connecting wireless networks should be done on the fly. Economy is also an important factor. For it, you need to create a special, simple and undemanding software for resources. And all this at a cost of no more than 100 US dollars, otherwise the project becomes meaningless in its essence. And by the way, according to the concept, every child should have received the device for free (at least in developing countries). 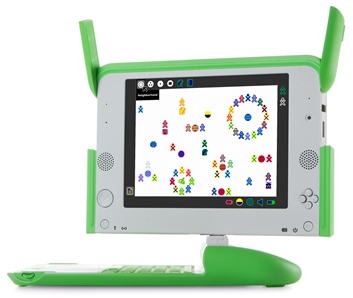 The first working model was introduced in 2005. Based on it, a subnotebook was developed XO-1 - an original device that meets all the ideas of the organization. Device (it is assembled by the company Quanta Computers) is based on the processor AMD Geode, equipped with 128 MB of RAM and a solid state drive with a capacity of 1 GB. The power is quite sufficient for educational purposes. And yet, the creators did not manage to meet the $100 (at the end of 2008, its cost was approximately $200). Overlays arose and arise with software that has not yet been brought to mind.

Laptops are sold directly to the government of the country, which then distributes them to educational institutions. As for retail sales, here OLPC promotes the following concept, the so-called "Give One, Get One" - if you want to buy this miracle for yourself, then you will have to pay for two devices at once - one will be given to you personally, the other will go to some child from a distant poor country of the Southern Hemisphere. Moreover, the children will go immediately, and the buyer has to stand in line for months. Naturally, such an approach does not appeal to much enthusiasm.

Some countries have also joined the project. Such as Brazil, Pakistan, Egypt, India (later withdrew from the project, stating that they themselves are able to create something similar), Tunisia ... The governments of the United States and European countries also showed interest. Implementation attempts XO-1 undertaken in Russia.

The organization periodically demonstrates its vision of what the next models will be. For example, it was told about the futuristic - subnotebook, devoid of a keyboard, but equipped with two touch screens. The demonstration of the concept aroused conflicting feelings - on the one hand, such a device could not but arouse well-deserved interest, and on the other hand, there were too many doubts. First of all, it is hard to imagine that such a concept would keep such a low cost, and the endurance of such a device is doubtful - yet it will fall into children's hands. Opinions immediately appeared on the Web, according to which such marvelous concepts are presented only in order to attract public attention. And even accusations that the project OLPC gradually turns into a cash cow and a cover for a completely different, commercial activity, that the future plans of its creators are far from selfless assistance to children in developing countries. I would like to believe that this is not the case at all.

Note. The very idea of a laptop designed specifically for education is not new. In March 1997, the Apple eMate 300 was introduced - a miniature laptop, positioned by the company as "the ideal device for a student." In fact, it turned out to be only a somewhat advanced pocket computer. newton (never very popular with consumers), equipped with a keyboard. The high price of $800 didn't help sales. In February 1998, the project was curtailed. In the future, Apple did not attempt to create such a device, although it became famous for the line eMac - computers specially designed for education, massively dispersed both in educational institutions and among home users.