Today, rumors appeared on the Web, according to which the founder of the world famous company IKEA, Ingvar Kamprad, said that it was time for him to leave the leadership position and hand over the reins to the younger generation. This information was later refuted.

It was reported that the post of Ingvar would be occupied by his three sons, each of whom would be engaged in his own branch of the business, and the father would no longer help them, as he had done before. 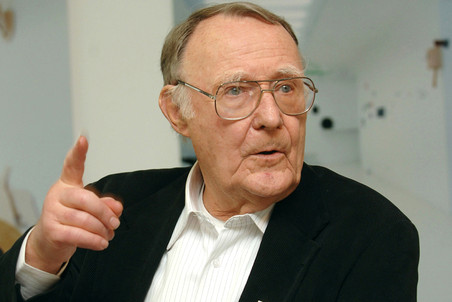 As a result, the rumors about Ingvar's departure from his position turned out to be premature and were refuted by the same publications that published them earlier.

86-year-old Ingvar is a legendary person in his own way. He founded his company when he was 17 years old. It was in 1943, when the situation in the world was far from stable.

Initially, IKEA traded stationery. The decision to take up furniture came a little later - in 1948. Then it was decided to release it unassembled, placing it in convenient flat boxes. Since then, the name of the company has been associated with this particular product.

But Ingvar Kamprad went down in history not only as an excellent businessman, but also as a terrible miser. Having amassed a fortune in excess of $23 billion, he still continues to save on everything, using a 15-year-old car and a seat that is over 30 years old.